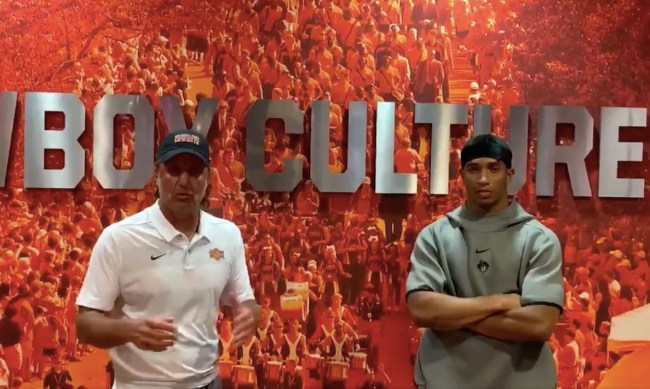 After star Cowboys running back Chuba Hubbard called out Oklahoma State University head coach Mike Gundy for wearing a t-shirt that supports a conspiracy theory channel, the pair appeared together in a video on Monday night to straighten out the issue.

While Gundy — who has been the head coach at OSU since 2005 — didn’t literally apologize, he said he met with the team and “realized that it’s a very sensitive issue.” Then, Hubbard apologized for calling Gundy out on Twitter and said he should have spoken to him directly, man-to-man, first.

Mike Gundy and Chuba Hubbard recorded a message together after Hubbard called for change at Oklahoma State.

The issue with the Gundy, who earns over $4 million per year as OSU head coach, wearing an OAN shirt is that the network is a far-right conspiracy-spewing propaganda machine that spews hateful messages such as calling Black Lives Matter a “farce”:

Its hosts, such as Graham Ledger, who called the Black Lives Matter movement a “criminal organization”, being transgender “a mental problem”, and said Muslims shouldn’t enter the country. His starting line for every show is: “The doors to the newsroom are locked and the ‘pc police’ are not getting in.”

The network has also promoted conspiracy theories, such as offering $100k for information in conspiracy target Seth Rich’s murder. Last year, they traveled with Trump sidekick Rudy Giuliani to Ukraine to film a series about his “investigations” in the country, and Rion recently hosted a special boosting a conspiracy theory that coronavirus was developed as a bioweapon in a lab in North Carolina.

“The whole selling point of OAN is that they are Fox News with even less shame, and even fewer scruples,” Last Week Tonight host John Oliver said. [via The Guardian]

In a statement on his Twitter account, Burns Hargis — the President of Oklahoma State University — said that the school will not tolerate “insensitive behavior”.

“I hear and respect the concerns expressed by our Black student-athletes. This is a time for unity of purpose to confront racial inequities and injustice. We will not tolerate insensitive behavior by anyone at Oklahoma State,” Hagis tweeted.