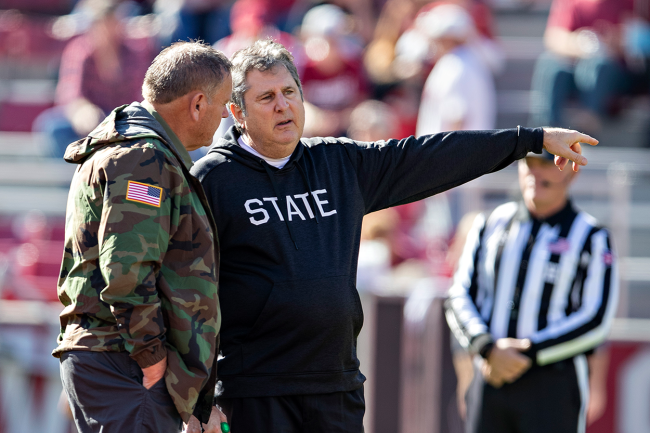 The Southeastern Conference is going to look different in a few years. Texas and Oklahoma are set to join the most dominant conference in football in 2025, if not sooner.

There will be some serious shuffling necessary when that happens.

Where are the Sooners and Longhorns going to go? Does the current two-division model work once the SEC adds two more teams? Is pod-like system in order? What rivalries will be protected? What schools will play each other every year and what schools will rotate?

These are the questions that need to be answered.

During the SEC Media Days on Tuesday, Mississippi State head coach Mike Leach was asked about what he thinks will happen. Rather than defaulting to the conference, he told The Clarion Ledger that the conference should let him be in charge.

He thinks it is the easiest way to get things figured out and his simple plan actually makes a lot of sense.

With Texas and Oklahoma joining, they will be on the “western” side of the Southeast. So why not put them in the West division?

Once that move is made, you have to look at the other schools in the West, and Auburn and Alabama are the most “eastern” schools in the SEC. Why not move them to the East?

“You knock those guys off and send them to the East and we have to play Texas and OU, tell me how I’ve lost on that deal,” Leach said. “I have a lot of respect for those guys, but in this conference they can just go ahead and get in line with everybody else.”

While Leach has embraced the future expansion of the SEC, he is tepid on whether conferences should keep getting bigger.

“It’s a little bulky,” Leach said. “If it’s just a conference, everybody plays everybody quite a bit. Ten to 12 is what you’re after, but I don’t think it’s realistic to play more than 16 games or too many more.”

In the meantime, it sounds like Leach has everything worked out. Who says no?!