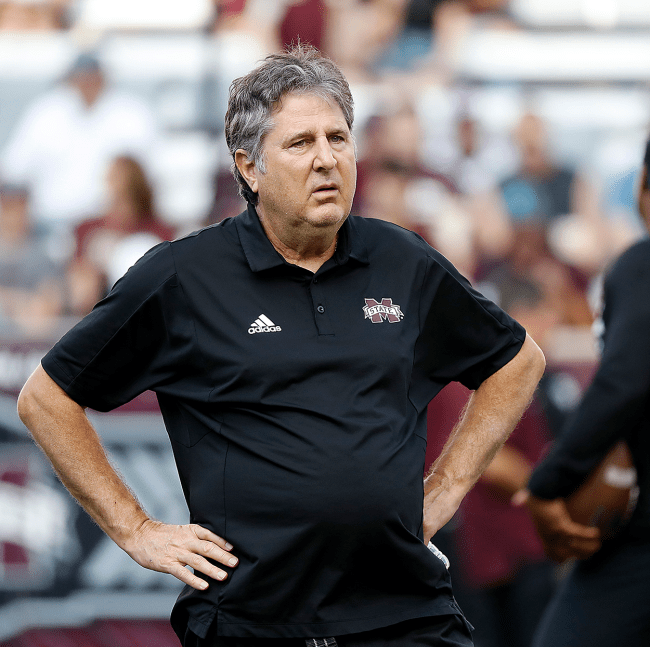 As Mike Leach and Mississippi State gear up for a revenge game against his former employer, Texas Tech, the 60-year-old head coach is not holding back. Leach and the Bulldogs will face the Red Raiders in the Liberty Bowl on December 28th and it comes with a lot of tension.

From 2000 to 2009, Leach served as the head coach at Texas Tech. He went 84–43 over the course of his time in Lubbock and reached a Cotton Bowl with a one-loss Graham Harrell and Michael Crabtree.

However, after nine years, his time with the program came to an abrupt end.

Shortly before the 2010 Alamo Bowl, Leach was fired for cause. He pushes back on that notion, claiming that the incident did not occur.

Adam James, the son of former ESPN commentator Craig James, alleged that Leach mistreated him after suffering a concussion. He claimed that Leach told him that if he was unable to practice because of his concussion, that he should be in a dark room, and proceeded to lock him in an electrical closet for hours.

He filed a lawsuit against the school and alleged that James put himself in the closet and apparently took pictures with his phone camera. He also filed suit against James and others for defamation and wrongful termination over the incident.

Despite the fact that Leach was adamant that no such incident occurred, Texas Tech fired him for cause. As a result, much of his five-year, $12.7 million contract was negated.

In 2017, Leach hired a consulting firm to look into public documents related to his firing. He believes that he is still owed at least $2.5 million.

When Mississippi State plays Texas Tech later this month, it will be the first time that Leach will see the Red Raiders on the opposing sideline. He was asked about his thoughts on the school earlier this week and did not hold back.

Although he had some great memories in Lubbock, Leach wants his money. He also took shots at the school, reminding them that they have not won nine games in a season since he was fired.

In terms of how it affects his team and its mentality, Leach did not advance the narrative.

“You’ve gotta be motivated for everything you do,” he said. “There’s no real extra reserve for motivation. You try to improve and be the best you can every day.”

He did, however, add that it might bring an extra layer to the matchup for the fans.

“I think it does for the fans, I think it’ll probably bring some fans,” he said. “I think both schools will probably travel pretty well.”

The Liberty Bowl kicks off at 6:45pm ET on the 28th. Will Texas Tech bring Leach’s check?