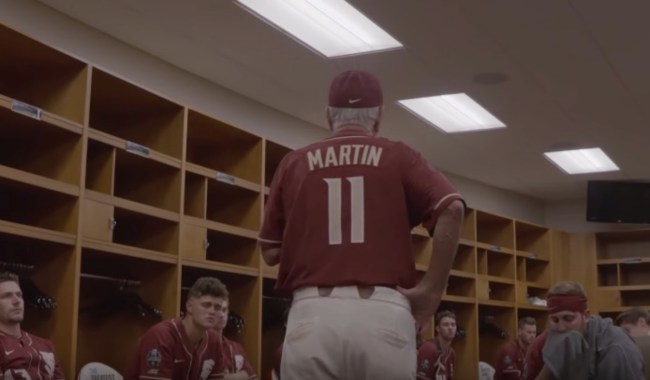 Florida State’s Mike Martin retired this season after 40 years as head coach of the Seminoles. He said all along that he was retiring this year when the season was over but the ‘Noles kept on winning all the way to the College World Series in Omaha where they lost in their third game to Texas Tech and were eliminated, a magical run to end Mike Martin’s career.

Martin’s 2,029 career wins over 39 seasons put him at #1 ahead of legendary Texas Longhorns coach Augie Garrido with 1,976 wins. He’s so good that he was inducted into the College Baseball Hall of Fame TWELVE YEARS before he retired.

FSU made 41 straight postseason appearances under Mike Martin’s tutelage and it will be impossible for the Seminoles to replace the greatest coach in college baseball history but that’s the task set forth for the Noles in Tallahassee.

With Mike Martin retiring after 40 years it wouldn’t have surprised anybody to see him break down, get emotional, and talk about the past during his final locker room speech after the Noles were eliminated in the CWS by Texas Tech but that’s not at all what happened. He gave one last speech and boy was it an excellent one…I guess I should at least mention that I went to FSU and this one really hit me in the feels.

After 40 years, one last word from Mike Martin. #Noles pic.twitter.com/aAUrfYK0jl

It’s not yet clear who will be the next Head Coach of FSU Baseball. Mike Martin’s son, Mike Martin Jr., is definitely a name that’s being thrown into the mix because he’s been a coach with the team for decades. Fans, myself included, have just assumed that he’d be the one to take over for his father but he spoke about this (via Rivals) and quelled those rumors:

“I do need to get my resume in. I haven’t done that yet. But I’ve had a few things on my plate of late, so I’ll get that turned in. I’ll do a bang-up job in the interview, and we’ll see where it goes.”

I will be shocked if FSU doesn’t hire Mike Martin Jr. to take over for his father. It continues a winning tradition, he’s as qualified as anybody, he knows the ins and outs of recruiting for FSU. Everything about that hire makes sense so it would be quite strange to see the school go in a different direction but only time will tell.