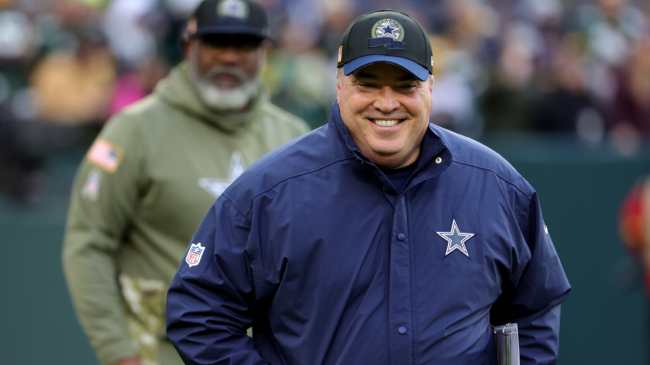 He was fired midway through the ’18 campaign after the Packers got off to a 4-7-1 start, ending his tenure in Wisconsin. Things soured between the two parties over McCarthy’s final season and a half as he posted back-to-back losing seasons. Still, his accomplishments in Green Bay are close to unmatched.

At least for everyone not named Vince Lombardi.

Lombardi is maybe the most storied coach in NFL history. His name is on the sport’s championship trophy. He led the Packers to five titles between 1961-1967, creating the first NFL dynasty.

McCarthy, now with the Cowboys, paid homage to Lombardi in his return to Lambeau Field by wearing the patented brown coat in pregame warmups. While it was likely nothing more than a tribute of respect, many Packers fans took it as a jab seeing how the relationship between the two sides fizzled.

Those Green Bay fans would get the last laugh following an exciting game.

Packers fans troll Mike McCarthy for dressing like Vince Lombardi only to blow a huge lead in his return to Lambeau Field.

Things appeared to being going smoothly for McCarthy and the Cowboys in his return to Green Bay. Dallas got up 28-14 in the third quarter following a Dak Prescott touchdown pass, and a win seemed inevitable given the Packers’ recent struggles.

But things quickly fell apart for the visiting team.

Green Bay tied the game with a pair of touchdowns in the fourth quarter, outscoring the Cowboys 17-0 over the final 20 minutes of action to secure an improbable come-from-behind victory. Aaron Rodgers spoiled his former coach’s return to Lambeau, sending McCarthy and the Cowboys home with a 31-28 overtime defeat.

One fan wrote, “Mike McCarthy played dress up as Vince Lombardi just to come into Lambeau Field and lose.”

A number of others posted similar reactions after seeing the deflating loss for McCarthy and the Cowboys.

McCarthy dressed up like Lombardi just to lose that game 😭😭😭😭

The Packers ruined Mike McCarthy’s return to Green Bay. He’ll look to get the Cowboys back on track, but he may want to lose the trench coat in the process.