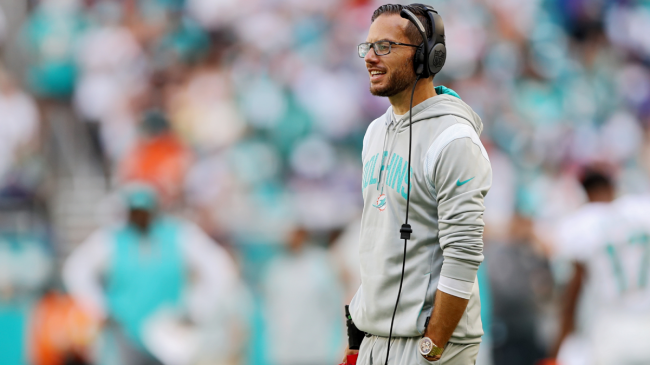 Miami had a surprise visitor at their preparations for this week’s matchup against the Bengals. Someone snuck into the facility to film the Dolphins practice, which was later posted all over Twitter.

Apparently, the spy wasn’t slick enough to get out of Mike McDaniel’s visibility. The head coach spotted the unwelcomed guest, making a sly adjustment to his offensive scheme.

In each of those videos posted on Twitter, the Dolphins used 12 players, as opposed to the usual 11.

The Dolphins noticed people watching their walkthrough Wednesday in Cincinnati, so they made a sly adjustment: All the clips circulating on Twitter have 12 players on offense.

Now, the plays filmed will have a bit of an unknown.

McDaniel didn’t likely run completely fake plays, at least not on every occasion. But he probably had at least one player running extra routes to throw the viewers off.

Many on social media reacted to seeing the report, with everyone agreeing that McDaniel is always one step ahead of the game.

Mike McDaniel at all times pic.twitter.com/l3pJuF4mOG

Podcaster Pat McAfee commented on that McDaniel IQ, saying, “All the video circulating around social media, McDaniel knew about. He went to Yale… that’s that young coach mentality. He’s playing next level chest with these people.”

Just as we thought.. Mike McDaniel was one step ahead #PMSLive pic.twitter.com/dYGOZ7iRAU

McDaniel sent a cease and desist letter to the NFL, which launched an investigation. All along, though, he knew about the perpetrators from the get-go.

This Dolphins fan said, “I’ve never seen someone who is always 5 steps ahead more than Mike McDaniel.” I mean, this is next level stuff.

I’ve never seen someone who is always 5 steps ahead more than Mike McDaniel https://t.co/Zm65giNnUE

It no longer looks like the Bengals will have an advantage on Thursday night.