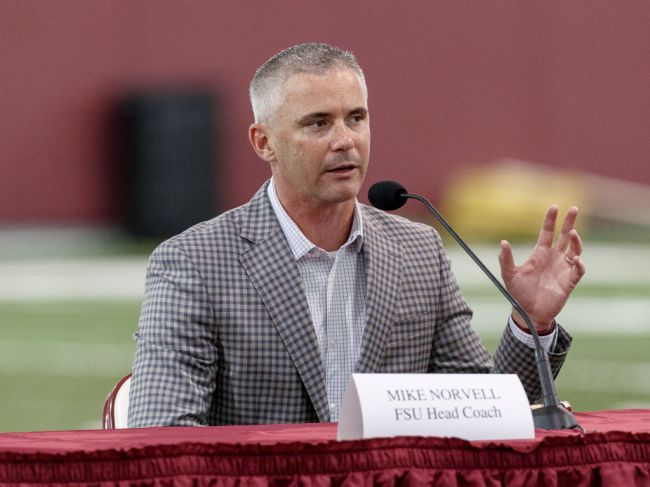 Clemson head coach Dabo Swinney was livid that Florida State elected to cancel its game against the Tigers just a few hours before the scheduled kick-off on Saturday. The Seminoles elected to cancel the game after a Clemson player reportedly tested positive for COVID-19 while making the trip to Tallahassee.

On Sunday, Swinney addressed the media about the game being canceled claiming that FSU simply canceled the game to avoid playing the Tigers. “This game was not canceled because of COVID, COVID was just an excuse to cancel the game,” Swinney said.

Florida State head coach Mike Norvell has since responded to Swinney’s comments denying the claim that his team ducked Clemson while emphatically stating that the decision to cancel the game was made entirely by the team’s medical personnel. He said they were excited to play the game before it was canceled.

Norvell also explained to the media that he first learned of the Clemson player testing positive on Friday evening during a call between both teams. According to FSU, Clemson informed the school of the symptomatic player that had traveled with the team and that proper protocols were followed.

This seems to be where the biggest disconnect is and the source of Swinney’s frustration. Reports state that there was a call between medical staff that did not include coaches on Saturday morning and shortly after that call was made the Noles elected to cancel the game. Why FSU couldn’t come to that decision on Friday as opposed to canceling the game three hours before kickoff is the big question and red flag here.

During his presser on Sunday, Swinney also said that if FSU still does want to play Clemson then the school should refund the travel expenses or have to make the trip to Clemson to play the game. Norvell responded to that saying that he wants the game to take place in Tallahassee and that if a financial contribution needs to be made then he’d “sign up to make one.”

All of this back and forth will probably for nothing. While it would be exciting to see these two teams actually meet up after all of this drama, chances are that this game won’t be played at all. Both schools have an open date on Dec. 12, but that would mean the Tigers wouldn’t have a bye week between their final regular-season game and the ACC Championship on Dec. 19. Clemson playing what would likely be a meaningless game prior to the ACC Championship wouldn’t make the most sense.