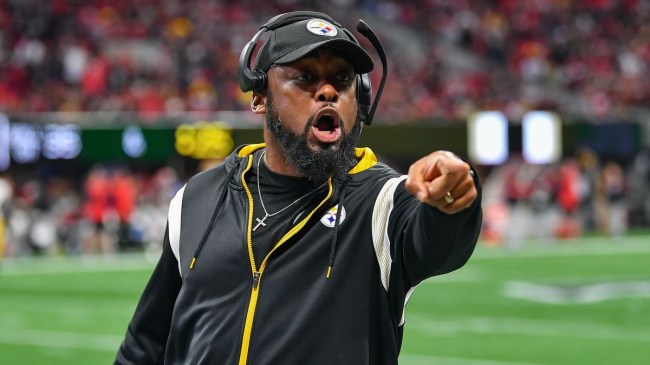 The post-Ben Roethlisberger Era in Pittsburgh is off to a rough start. The Steelers, now led by a first-round pick Kenny Pickett at quarterback, entered Sunday’s game against the Atlanta Falcons just 4-7 and clinging to life for a potential playoff spot.

The Steelers have made the playoffs in 10 of Mike Tomlin’s 15 years as the franchise’s head coach. Perhaps more impressive is that Tomlin has not finished under .500 in any of those 15 seasons. But it appears that streak may be coming to an end.

Typically, the veteran head coach is relatively upbeat with members of the media and fans. But the second-longest-tenured head coach in the NFL has rarely had to deal with a struggling team along the way. Now that that’s the case, it appears his attitude may be a tad bit different.

Tomlin’s Steelers were locked in a tight game with the Atlanta Falcons entering the halftime break on Sunday. Pittsburgh took a 16-6 lead into the break, but the Falcons were set to receive the second-half kickoff.

One fan felt that halftime was a good time to try to get Tomlin’s attention as he walked through the Mercedes-Benz arena tunnels. Apparently, Tomlin disagreed.

“Coach Tomlin, let’s go for the win, man,” the fan says as Tomlin walks by and he offers the coach a thumbs up.

But Tomlin seemed to be staring at his tablet and trying to improve his team for the second half of the contest.

“Man, I’m f-king working,” he said before the camera pans back to a surprised-looking fan.

The incident is more funny than it is malicious, and it must have worked for Tomlin. The Steelers went on to win the game, 19-16. Pittsburgh now sits just two games behind the Jets for the final Wild Card spot in the AFC and the fan has a memory for life.