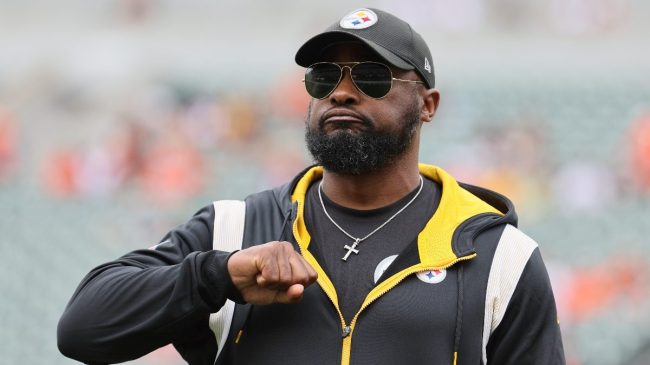 Mike Tomlin is chock full of hilarious quotes that you can probably go back to when he first became the head coach of the Pittsburgh Steelers and find something funny. Well, he struck again while talking about rookie running back Jaylen Warren, who filled in for Najee Harris in Week 1.

During a press conference with the media, Mike Tomlin was asked about Jaylen Warren’s first game. The Steelers head coach responded with, “He didn’t urinate down his leg and that’s a great place to begin.” Well, we simply have to agree with that take.

Pittsburgh struggled to get anything going on the ground. Najee Harris didn’t do much and ended up leaving the game early due to injury. In comes Jaylen Warren, who only ran the ball three times. However, he was equally efficient (or non-efficient) as Harris was for the Steelers. Hopefully, Mike Tomlin can get something going on offense throughout the season.

With Najee Harris nursing a lingering ankle injury, we might see Jaylen Warren more than expected. He reeled in a ton of hype throughout the offseason. So much so, that Mike Tomlin named him the immediate backup running back for the Steelers.

We’ll see how the rest of the season plays out for this franchise. The defense looked amazing while the offense largely struggled against the Cincinnati Bengals. However, if the run game can get going, then life should become much easier for Mike Tomlin and the Steelers. Keep an eye on Jaylen Warren, as he could become a major contributor to this offense if Najee Harris can’t stay healthy.