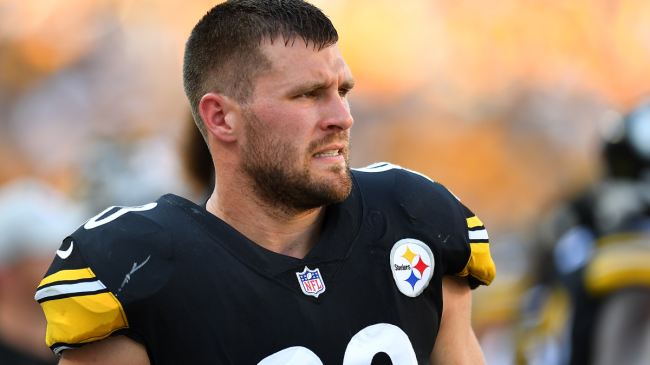 Star defender TJ Watt appeared to suffer a pectoral injury near the end of the Steelers’ Week 1 win over the Bengals. He even said so himself after coming off the field Sunday afternoon.

A full tear would essentially end Watt’s season before it began. The recovery process for a pectoral tear typically takes 3-4 months if deemed high-grade. But a recent report out of Pittsburgh could offer the team a sense of optimism.

Jonathan Jones, an NFL insider at CBS Sports, has reported that some inside the Steelers building think the tear could be ruled low grade. In that case, the recovery time drops down to around 4-6 weeks, meaning Watt could be back on the field by midseason.

Here’s what Jones tweeted out on Monday morning.

“There’s some optimism today in Pittsburgh that OLB and Reigning Defensive Player of the Year T.J. Watt did not experience a full pec tear and will be able to return after sitting for a month or so, per league source. Still awaiting word from the team.”

The team has not responded to the report, and they’ve yet to make an announcement on Watt’s injury status, but the optimistic news from Jones has fans hopeful.

Watt was easily the Steelers’ most productive player on defense, taking home NFL Defensive Player of the Year honors following a 22.5-sack season. He made a huge impact in that Week 1 win on Sunday, picking off a pass and racking up three tackles for loss.

Watt has led the AFC in sacks each of the last two campaigns while tallying First-Team All-Pro honors in three straight years. The Pittsburgh defense certainly takes a hit without him on the field, but if that time away from the field can be limited, the outlook on the Steelers’ season changes drastically.

Pittsburgh fans are cautiously optimistic after hearing the report.

One fan says, “This would be best case scenario. Partial pec tear, with correct injection & rehab approach could have him back in 6-8 weeks depending on severity. Potentially great news.”

This would be best case scenario.

Partial pec tear, with correct injection & rehab approach could have him back in 6-8 weeks depending on severity.

Another wrote, “Fingers crossed, the game is better with him in it.”

fingers crossed, the game is better with him in it 🤞

But while the report is encouraging, Steelers fans are still waiting official news from the team. This supporter responded, “Someone please confirm this!”

Someone please confirm this!

If the injury report is true, it will be a huge break for both Watt and the Steelers.