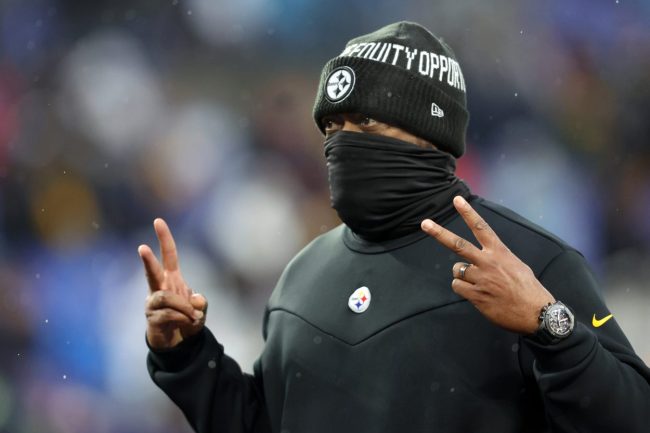 As long as Sunday Night Football between the Chargers and Raiders did not end in a tie (which was very possible), the Pittsburgh Steelers secured an unlikely playoff bid with their win over the Ravens on Sunday afternoon. After the game, head coach Mike Tomlin couldn’t help but dance on Baltimore’s grave.

Tomlin, who is notoriously stoic and rarely shows his emotion, let loose.

As the team went into the locker room, inside linebacker Marcus Allen went live on Instagram. With Bankroll Fresh, 2 Chainz and Skooly’s ‘Take Over Your Trap’ playing in the background, he and his teammates celebrated the victory.

First of all, the song choice was savage. Pittsburgh went into Baltimore and beat the Ravens on their home field.

“WALK IN YOUR TRAP AND TAKE OVER YOUR TRAP”

The Steelers were taking a direct shot at the Ravens and dancing on the grave of their opponent.

And then, as the team was dancing and hugging, a familiar face poked his head from around the corner. Tomlin, with a smile on his face, was absolutely lit and got down.

Clearly the win meant a lot to him and the team. In a year where the playoffs seemed unlikely, Pittsburgh snuck in at the last second and celebrated accordingly.