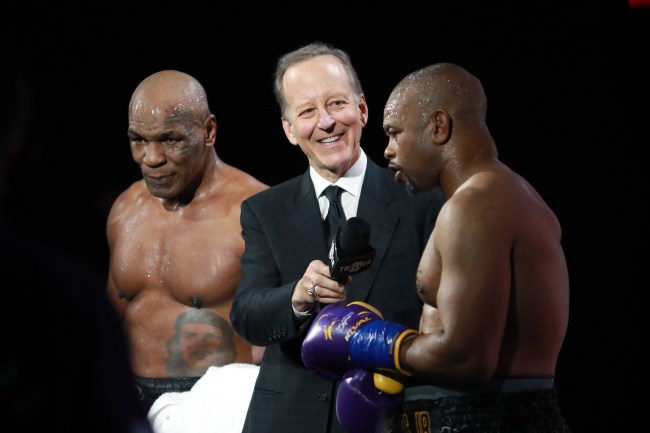 It’s no secret that a lot of boxing fans out there were very intrigued by the Mike Tyson-Roy Jones Jr. exhibition match when it was announced earlier this year. I’m not sure people were expecting to see these types of ratings come from a fight between two 50-year-olds, however.

The November 28 fight at the Staples Center, which ended in a draw, reportedly generated over $80 million with more than 1.6 million pay-per-view purchases according to projections released by Tyson’s Legends Only League and Triller, the fight’s distributor. The fight was $49.99 to purchase on pay-per-view.

Leading up to the fight, reports suggested that Tyson was going to be taking home $10 million while Jones reportedly earned $3 million for his efforts.

Shortly after the Tyson-Jones Jr. exhibition, Evander Holyfield called out Tyson in a press release claiming that Tyson has been ducking him and that the idea of an exhibition was his in the first place.

“Former undisputed heavyweight champion Evander ‘The Real Deal’ Holyfield says he was confused when Mike Tyson chose Roy Jones Jr. and not him for his exhibition-bout comeback… then he watched their fight Saturday night.

“‘My side tried to make the fight happen and we got nothing but excuses,’ said Holyfield. ‘Now I can see why he wanted a tune-up fight before thinking about me.’

“‘The Real Deal’ says the idea of an exhibition bout was his. Still in supreme physical condition in his 50s, and training in the gym for months, Holyfield feels Tyson took a practice run Saturday night, but there is only one fight the world wants to see.

The 58-year-old Holyfield last fought in May of 2011 while Tyson’s last fight prior to his bout with Jones Jr. was in June of 2005.

Tyson-Jones Jr. seemed to work from a money standpoint and one would assume a Holyfield-Tyson bout could turn in similar numbers.