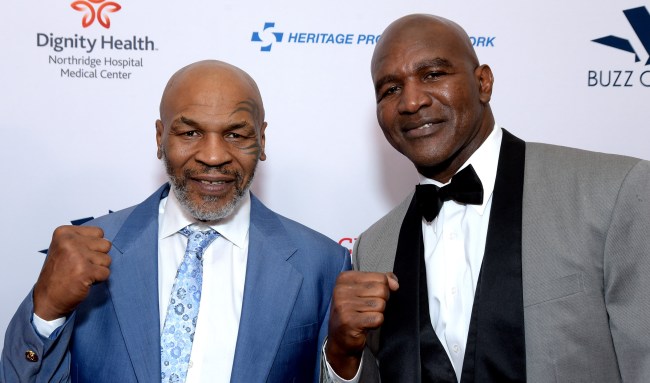 The 58-year-old Holyfield, the only boxer in history to win the undisputed championship in two weight classes, hasn’t had a professional boxing match since May 7, 2011. Until Saturday night, the 54-year-old Tyson hadn’t fought since June 11, 2005. Yet Holyfield continues to claim that Iron Mike is ducking him, even going so far as to have one of his reps claim “Tyson is scared.”

On Tuesday, Holyfield once again publicly called out Tyson, this time in a lengthy press release.

“Former undisputed heavyweight champion Evander ‘The Real Deal’ Holyfield says he was confused when Mike Tyson chose Roy Jones Jr. and not him for his exhibition-bout comeback… then he watched their fight Saturday night.

“‘My side tried to make the fight happen and we got nothing but excuses,’ said Holyfield. ‘Now I can see why he wanted a tune-up fight before thinking about me.’

“‘The Real Deal’ says the idea of an exhibition bout was his. Still in supreme physical condition in his 50s, and training in the gym for months, Holyfield feels Tyson took a practice run Saturday night, but there is only one fight the world wants to see.

“‘Roy Jones was a good local opponent for Mike,’ said the unimpressed Holyfield. ‘But a fight with me would be a global event and the only fight that anyone wants to see is a fight between us. There is absolutely no reason why we shouldn’t make it happen.’

“By consensus, Tyson got the better of Jones during the eight-round exhibition match at STAPLES Center Saturday night, a fact that Holyfield says clears the way for the pair to finish their historic rivalry the only way they can.

“‘No more excuses. This is the fight that must happen for both our legacies. Saturday night you said you were ready to fight me, so sign the contract and get in the ring, Tyson. The world is waiting and it’s on you now. I’m ready.'”

Really though, is the world waiting? Is it?

Holyfield says isn’t “getting in the ring for less than $25 million,” so don’t hold your breath waiting for this rivalry to become a trilogy.