Evander Holyfield, 58, Says He Wants Next, Claims Mike Tyson Is Ducking Him 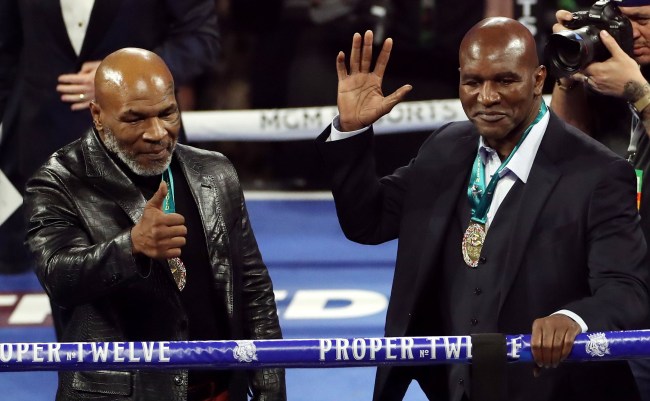 The Mike Tyson vs. Roy Jones, Jr. “exhibition” boxing match is set to take place at Staples Center in Los Angeles on Nov. 28 in a battle of two guys in their fifties that no one asked for, but everyone will probably be watching.

Both fighters have said they are at peace with dying in the boxing ring, leading many to believe the fight will be unlike any “exhibition” bout ever witnessed.

Tyson, 54, has gone on record saying he isn’t planning on holding back during the fight.

Jones, 51, in an interview with Joe Rogan, said about the fight, “Think about it… oh, it’s an exhibition, but we got 12 oz. gloves. But it’s exhibition, no headgear… exhibition, judges. And, exhibition, Mike Tyson who knocked Corey Sanders down in the first round of an exhibition back in 2004.”

So it sounds like the chances of the fight going the full eight rounds are pretty slim.

One person who is hoping that Mike Tyson is the last man standing on Nov. 28 is none other than four-time world heavyweight champion Evander Holyfield.

He even, somehow, believes Tyson has been ducking him. (Tyson hasn’t fought since June 11, 2005.)

According to a source who spoke to TMZ, “It’s not even about the money at this point, I think Tyson is scared. We’ve offered multiple times and Tyson vs. Holyfield is the fight that should happen.”

Who wants to see a rematch?! We’re ready. 💯 #TEAMHOLYFIELD

Who would like to see Holyfield vs Tyson 3? Or who else would you like to see me get in the ring with in an exhibition? #teamholyfield

Meanwhile, Tyson told Jim Gray during halftime of Monday Night Football last week that a third fight with Holyfield sounds good to him, “That’s always something that we can do if the people want it, if it’s pragmatic enough, I’d love to do it.”

As for him, Jones and Holyfield being too old to be boxing each other, Tyson told Gray, “‘Old guys’ – that word don’t even make sense. ‘Old.’ It’s just a new time, a new thinking period in our lives. This is what we want to do. Sometimes the gods of war, they revive you and say, ‘You have to do more.’ Now I wouldn’t do it if I didn’t prepare for this. I box people to see if I’m able do this stuff, so I can do this stuff.”