Evander Holyfield Announces He Too Is Coming Out Of Retirement, Fans Really Want Him To Fight Mike Tyson 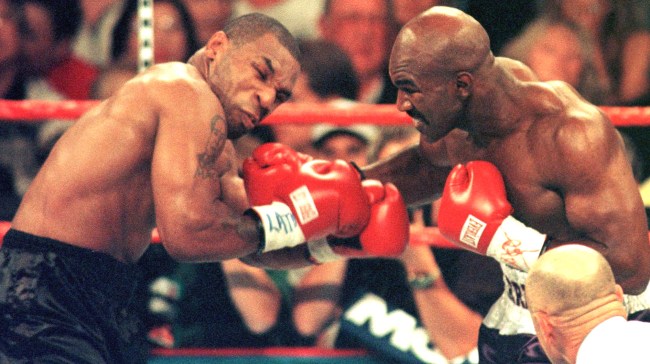 A few weeks ago, boxing legend Mike Tyson announced that he was making a comeback and returning to boxing after being out of the game since June 11, 2005.

His trainer Jeff Fenech said if Tyson were to get six good weeks of training he believed Iron Mike could knock out Deontay Wilder in one minute.

Earlier this week, the 53-year-old Tyson showed during a training session that he is still certainly not a man to be trifled with showing off his power and throwing some punches with some very bad intentions.

Apparently it’s Old Folks Week in the world of boxing, because now 57-year-old Evander Holyfield says that in addition to Tyson, he too is going to be coming out of retirement with a comeback fight after not boxing professionally since May 5, 2011.

“Are you ready? The moment you’ve all been waiting for… The Champ is back! 🥊,” Holyfield wrote on social media.

(Have we all been waiting for this? Have we really, Evander?)

“I’d like to announce that I will be making a comeback to the ring. I’m training to promote a charity that’s very close to me. Our #Unite4OurFight campaign aims to fill the void the pandemic has created on access to resources our youth needs for emotional development and education.”

Naturally, because we are all idiots who love nothing more than watching a good car crash, fans immediately saw the potential for a third Tyson-Holyfield fight.

Tyson, the youngest boxer to win a heavyweight title and the first heavyweight to ever simultaneously hold the WBA, WBC and IBF titles, holds a record of 50–6 with 44 KOs.

Holyfield, the only boxer in history to win the undisputed championship in two weight classes and the only four-time world heavyweight champion, is 44–10–2 with 29 KOs.

Those records should probably stay right there, but, you know…

Are you fighting @MikeTyson ? If so ..... OMG pic.twitter.com/M6hwCcMBzW

You and @MikeTyson coming back, surely @LennoxLewis need to come back? #Returnofthekings

You are likely to break the bank if you go 4 rounds with Tyson again. I can see PPV numbers shooting through the roof.

I don’t know… I think I’d rather see Iron Mike fight Tyson Fury’s dad John – a former boxer himself – than have to go through Tyson and Holyfield fighting each other again for the first time since June 28, 1997.