Mike Tyson Training For A Return To Boxing, Trainer Says Give Him 6 Weeks And He’d KO Wilder In 1 Minute 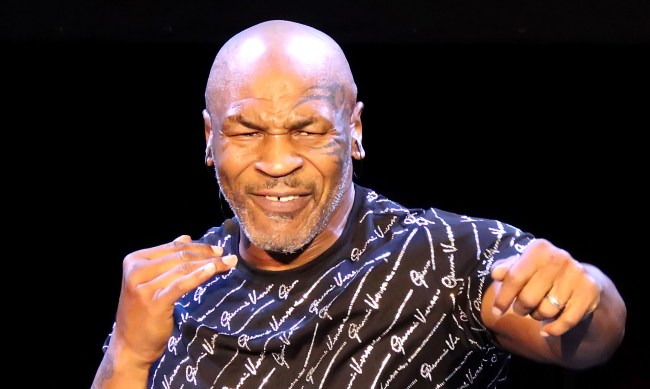 Mike Tyson will turn 54-years-old in June. He hasn’t boxed since a June 11, 2005 loss to career journeyman Kevin McBride, AKA The Clones Colossus, that dropped his professional boxing record to 50–6.

HOWEVER! This is the same man who once knocked out a garbage man at the age of 10 and as he showed back in November in a video of him teaching UFC heavyweight Francis Ngannou, he is still a very bad man.

“I’ve been hitting the mitts for the last week,” Tyson said recently on Instagram Live with rapper T.I. “That’s been tough, my body is really jacked up and really sore from hitting the mitts. I’ve been working out, I’ve been trying to get in the ring, I think I’m going to box some exhibitions and get in shape. I want to go to the gym and get in shape to be able to box three or four-round exhibitions for some charities and stuff. Some charity exhibitions, make some money, help some homeless and drug-affected motherf***ers like me.”

Who wouldn’t pay money to see that?

“I do two hours on cardio, I do the bike and the treadmill for an hour, then I do some light weights, 250 to 300 reps,” Tyson added. “Then I start my day with the boxing thing, I go in there and hit the mitts, 30 minutes, 25 minutes, start getting in better condition.”

“When Deontay Wilder knocked out Ortiz, there was hardly a punch thrown in the fight. Boxing’s not the same now. I’d guarantee that if Mike Tyson trained for six weeks, he’d knock Wilder out in a minute,” Fenech told The Sporting News.

“He would hit them. If these guys are getting knocked out by Tyson Fury – who’s a great fighter, but not a huge puncher – Tyson would kill these guys,” he continued. “They’re not on the same level today. Mike today, I reckon if he trained he could still beat these guys. Fury’s got these other skills, but Deontay Wilder’s got a punch and nothing else. If you punch him, it’s over. And Mike don’t miss.”

I would DEFINITELY pay to see that.