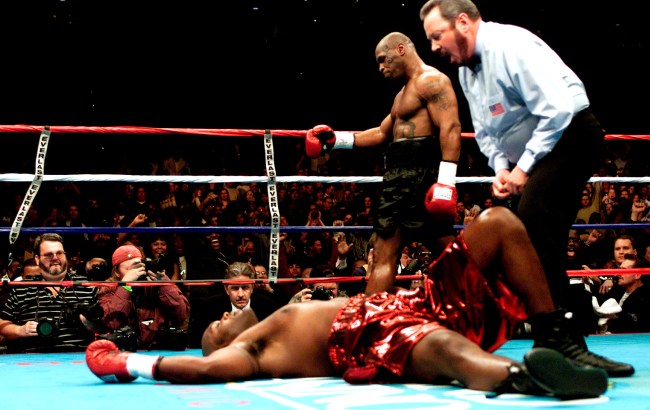 My God, can you imagine the havoc Mike Tyson would wreak if he was still in his prime and fighting in the UFC wearing a measly pair of 4 ounce gloves? Bro was absolutely destroying heavyweights – almost always guys bigger than him – back in the day wearing gloves more than two times as heavy.

My take? His fights in the UFC would have been bloodbaths and he might have actually killed someone.

Tyson, however, humbly believes that he wouldn’t have done that well.

Sure, Mike, whatever you say.

On the latest episode of GQ’s “Actually Me,” Tyson went “undercover” on the Internet and responded to real comments from Twitter, Quora, IMDb, Wikipedia, YouTube, and Reddit.

It was on Quora that it was asked how Tyson would do in the UFC. Iron Mike’s response was more than a little suprising.

“I don’t know how I would do in the UFC, because I watched UFC a couple of times, and I watched these guys step on people’s feet and I have the worst feet in the world, right?” he responded. “And if somebody stepped on my feet I would totally tap out. I would just give up. It would be a no-brainer.”

That, or he would just do this and be done with them.

Tyson also answered the question, “Would he take an uppercut to the chin (no gloves) from himself in his prime for half a billion dollars?”

He happily replied that he would. Not so sure I would have, because, you know, you can’t spend money when you’re dead.

Other questions Tyson answered included why he retired from boxing, why he bit Evander Holyfield on the ear, how he was discovered by Bobby Stewart after being arrested 38 times as a youth, how he developed such a powerful punch, what his diet consists of now versus when he was fighting, what it was like living with a pet tiger, and who would win in a street fight between Mike Tyson in his prime and Floyd Mayweather?

Watch the entire segment and see how he answered those questions, and others, below.