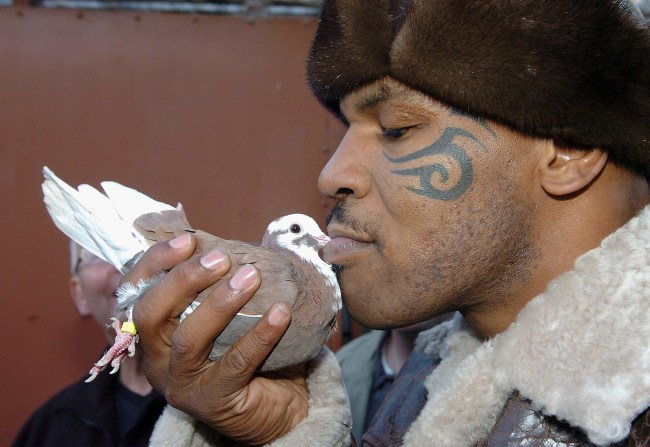 Mike Tyson has long-been known as the “baddest man on the planet,” but did you know the legendary boxer earned that reputation well before he was the heavyweight champion of the world inside the ring? After a tough upbringing, it probably doesn’t come as much of a surprise that Tyson was getting in his punches on fools at an early age — and some of the reasons why are pretty wild.

On the exterior, Tyson is a cold-blooded killer, and intimidates the fuck out of anyone who dares to go mano a mano with him. Just getting into a staring contest with the former boxer is enough to make someone piss their pants from fear; or so I’d imagine. But on the interior, Mike Tyson has a sensitive side — as he recently showed when he broke down in an interview describing some of the struggles he’s dealt with throughout his life. It was pretty cool seeing the guy be so vulnerable and open up, considering his reputation.

Another way Tyson has shown a softer side is through his relationship with pigeons; seriously. For whatever reason, he’s always treated the birds with lots of care, even describing them to be “just like people,” so it probably isn’t too surprising to hear the recent story he told about knocking a garbage man out once after the guy threw away one of Tyson’s dead pigeons. Yeah, it wasn’t even alive, yet Mike Tyson still copped revenge.

While talking to the World Boxing Council, here’s what the former boxer had to say about the incident, which actually took place when he was just 10 years old.

Per Give Me Sport:

“One morning I woke up and found my favorite pigeon, Julius, had died I was devastated and was gonna use his crate as my stickball bat to honor him.

“I left the crate on my stoop and went in to get something and I returned to see the sanitation man put the crate into the crusher.

“I rushed him and caught him flush on the temple with a titanic right hand he was out cold, convulsing on the floor.”

The love that Mike Tyson has for pigeons is very real, guys, and if that story from his youth wasn’t enough to prove it, just look at the 2015 video below to see how enthralled he is when talking about the birds.

Pigeons might not mean much to you or I, but, like a dog or cat brings comfort to most people, the birds give Mike Tyson peace and support. It might be an unconventional animal to do such a thing, but, hey, Tyson isn’t your typical person, so all of this makes so much sense when you really think about it. RIP to that poor garbage man, though, because getting knocked out cold by a 10-year-old can’t feel good for the ego.