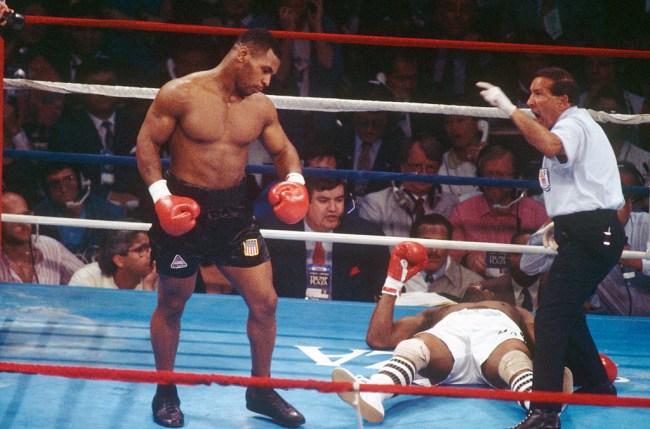 Michael Gerard Tyson was born in Brooklyn, New York, on June 30, 1966. He was the son of Lorna Mae (Smith) Tyson, and the father on Mike Tyson’s birth certificate was Purcell Tyson, his biological father, whom he never knew. Growing up on the mean streets of Brooklyn quickly prepared the young Mike Tyson for the harsh world of boxing.

Tyson was often bullied for his high voice and lisp, which provided fuel for Tyson’s fighting ways. Tyson started fighting his bullies, and he quickly found out that he had a gift. But the violence and the street life only brought more misery for Tyson, who was arrested 38 times by the time he was 13-years-old.

Tyson’s criminal behavior landed in the Tryon School for Boys, a reform school in upstate New York. That is where Tyson met juvenile detention center counselor Bobby Stewart, who was a former amateur boxing champion. Stewart agreed to teach the young Tyson how to box as long as he promised to not use it against other kids.

Stewart saw how special of a fighter that Tyson was and trained him for months. Tyson’s boxing skills were so impressive that Stewart introduced Tyson to legendary boxing manager Constantine “Cus” D’Amato and veteran boxing trainer Teddy Atlas.

In a recent interview with RingTV, Atlas remembered the first time he saw the young Tyson.

“As far as most pure, God-given talent, raw, from the earliest stage that you saw, it would have to be a 12-year-old Tyson, who was 190 pounds but no fat,” Atlas recalled.

“He had to impress me and Cus; he had to box his first day with a 27-year-old man who was a professional fighter and he was able to do that,” said Atlas, who trained Tyson until the age of 15.

Atlas said a 12-year-old Mike Tyson was knocking out grown men. “Anyone who could be knocking out men when he’s 12, 13 years old is a pretty damn good puncher,” Atlas explained.

Atlas proclaimed that Tyson was the best puncher he ever trained and “was extremely strong.” So strong that Atlas couldn’t put a young Tyson in the ring with kids his own age because he’d obliterate them.

“When you’re developing a guy who’s 12-years-old, and you can’t put him in with kids to spar because there are none and so you’re hiring sparring partners, and they’re men, and he’s hurting them and knocking them out,” Atlas said in the interview.

“He learned the technique to make you miss and catch you clean, but power’s power and punchers are born not made,” Atlas continued. “Tyson’s maybe one of the best punchers in history.”

D’Amato entered Tyson into amateur boxing matches and non-sanctioned fights, to teach the young boxer how to fight older opponents.

Cus D'Amato talks tactics with a 14-year-old Mike Tyson. (1980) pic.twitter.com/wpoxzL2Jh2

By 1981, Tyson boxed in the Junior Olympic Games. The 15-year-old Tyson took on Joe Cortez in 1981, in just nine seconds with a devastating left hook.

The 1981 Jr. Olympics were just the start for a young kid from Brownsville, the rest as they say is history. The Tyson x @rootsoffight collection just got a refresh check it out at rootsoffight.com #KnowYourRoots

Tyson continued his dominance with an eight-second KO of Dan Cozad in the 1982 Junior Olympics.

At the 1983 Empire State Games, a young Mike Tyson knocked out Winston Bent.

Then Tyson ran into Henry Tillman, who defeated Tyson in both bouts by decision. Tillman would go on to win heavyweight gold at the 1984 Summer Olympics in Los Angeles.

Look at Tyson physique at 17 🙄🙄 pic.twitter.com/H3qUSFLi1O

1984 was the year it all began to feel real. I knew we were going to achieve our goals. http://t.co/gdz1IELaBt pic.twitter.com/TUmpbWLKWV

After failing to make the US Olympic team, D’Amato believed that his prodigy was ready to turn pro. Tyson’s first professional boxing match came at the age of 18, and it was a scary warning shot to every other heavyweight fighter. On March 6, 1985, in Albany, New York, Tyson TKO’d Hector Mercedes in the first-round.

But the same year, Tyson lost his father-figure when Cus D’Amato died of pneumonia on November 4, 1985. Boxing trainer Kevin Rooney would become Mike’s new coach.

In case you guys missed it, here is a clip from last week’s episode of my podcast, @BiteTheMic: While I recover from back surgery enjoy this early interview with my co-host, @Rosenbergradio and me as we do a deep dive on my relationship with Cus like you have never heard before! Link is in @BiteTheMic’s bio. AND BE SURE to FOLLOW @BiteThemic FOR MORE! #BiteTheMic #Boxing #MMA #MikeTyson #HipHop #WWE #IronMikeTyson

Tyson went on a rampage in the ring, and by the age of 20-years-old, Tyson had a 22-0 record, 21 of which came via KO. Tyson earned his first title fight on November 22, 1986, against Trevor Berbick for the World Boxing Council (WBC) heavyweight championship.

Tyson cruised to victory with a TKO in the second round.

Iron Mike Tyson became the youngest heavyweight boxing champion of the world in 1986, at the record age of 20 years and four months.

Tyson would go on to have a legendary career, winning 50 of his 58 total fights, 44 of which came by KO, along with two no contests.

You can see the boxing evolution of Mike Tyson from 1982 until 2018 in the video highlights below.