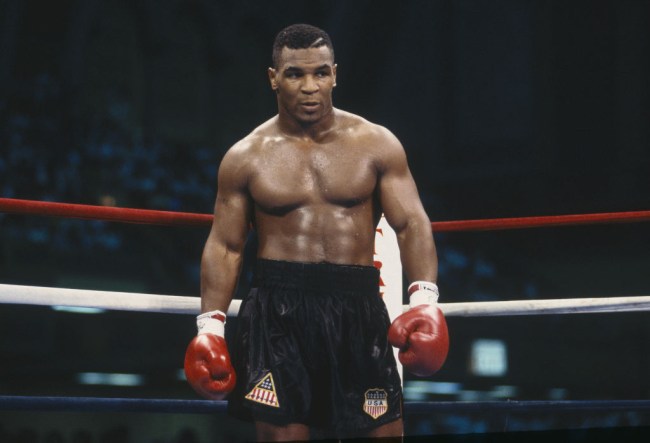 Mike Tyson’s final professional fight happened on June 11, 2005, when the then-38-year-old boxer suffered a TKO in the sixth round at the hands of journeyman boxer Kevin McBride. Tyson, who had been one of the greatest fighters of all-time since winning his first heavyweight title at 20-years-old, retired after the humiliating defeat. Now at the age of 53, Mike Tyson still has the boxing skills and quickness of fighters who are decades younger.

A video of Mike Tyson teaching an impromptu MasterClass on boxing has gone viral with more than 1.7 million views and over 91,000 Likes on Twitter. Rocking jeans, a polo shirt and dad shoes, Iron Mike provided a boxing tutorial for the internet.

Despite putting on a little weight (possibly from the munchies because he lives on his own marijuana ranch in California), Tyson displays cat-like quickness on his feet and punches that come at you like hungry vipers on speed.

The 53-year-old Iron Mike who finished his illustrious boxing career with 50 wins, 44 by knockout, has still got it. You would not want to mess with an angry Mike Tyson. Give him a joint and pray that he doesn’t knock you to Bolivian because he still has deadly quickness.

Mike, I take back the comment about the “dad shoes,” please don’t punch me into next Thursday.

Mike Tyson Bringing Marijuana Ranch To The Caribbean, Chokes Up After Taking Big Weed Hits With Rastafari Elder In Antigua

Mike Tyson Breaks Down To Tears Talking About Tupac’s Death, Remembering The First Time They Met