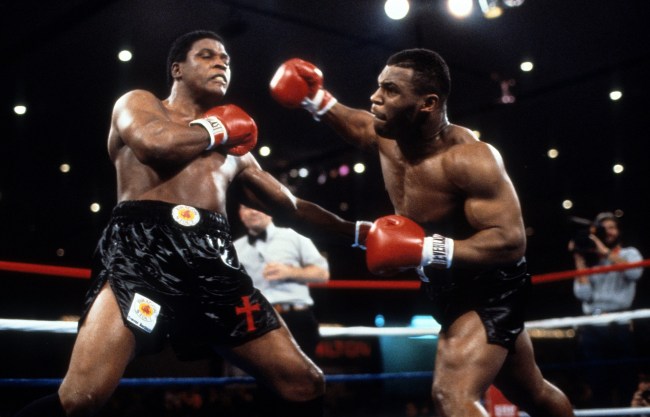 In the history of boxing, there have been some fighters who have the power and strength to end a large majority of their fights with lights-off knockouts. Over the last decade, Deontay Wilder has established himself as one of the greatest knockout artists in the history of the sport. But legendary boxer George Foreman says don’t anoint Wilder as the best ever just yet.

TMZ talked to George Foreman this week and asked his opinion on Deontay Wilder. Foreman was asked if Deontay is the greatest heavyweight knockout artist of all-time.

Foreman said to become a great knockout artist, Wilder would need to “have a performance like Mike Tyson did over Trevor Berbick. Boy, when I saw that, I was down visiting Vegas, and I thought, ‘This guy is a nightmare!'”

Tyson’s first title fight came on November 22, 1986, against Trevor Berbick for the World Boxing Council (WBC) heavyweight championship. Tyson easily disposed of Berbick in the second round with a devastating left-handed punch to the head that sent Trevor to the mat. He was wobbling on his feet in an attempt to stay in the fight, but the referee called it since Berbick was clearly dazed.

But Foreman said he was excited for Wilder’s rematch against Tyson Fury, which was the only slight blemish on Deontay’s incredible boxing resume. Deontay Wilder vs. Tyson Fury fought on December 1, 2018, and ended in a twelve-round split decision draw.

Foreman was asked if Wilder is the hardest puncher of all-time, to which he quickly responded by saying “Nah” while shaking his head in disapproval. When asked if Deontay punches harder than Tyson did in his prime, Foreman didn’t give a clear cut winner, but did say, “That Tyson could hit, man.”

Deontay Wilder has responded to Foreman’s opinions by proclaiming: “I am the hardest-hitting puncher in boxing history, period.”

“I don’t know what the deal is with the old generation, new generation,” Wilder said. “Like, the old is the past, bro. Let it go!”

“I’m 42-0 with 41 KOs, the numbers speak for themselves,” Wilder said. “I have a 97% ratio to knockout. I’m above everyone. Numbers don’t lie. So I don’t know what Foreman is talking about.”

Deontay added that Mike Tyson has praised him in private, but never went public with his compliments. “I had some people sitting by Mike (at my fight),” he told TMZ. Mike gave me some praises, which I wish he would have said in public. Behind closed doors is cute and s**t but out in public?! Just express yourself!”

Wilder believes his hardest punch he ever landed in a fight was the brutal hit he laid on Polish boxer Artur Szpilka in January of 2016.

“Man, I think the Szpilka fight still tops it. Just the way that he landed, and I really didn’t see him breathing at all,” Wilder explained. “I didn’t see him start breathing until his GF came over, and he finally woke up.”

“It was like something in the movies, and I actually had to witness it with my own eyes, and it was amazing to see that,” Deontay continued. “That one, I really felt it. Ortiz, I didn’t feel the punch.”

Wilder said he only has six years left in boxing, so people should give him the credit he deserves.

Last week, the Bronze Bomber said he has a plan for his upcoming opponents. After his seventh-round knockout of Luis Ortiz last Saturday, his next fight will be Wilder Vs. Fury II, which the venue and date will be announced next week.

Then he wants to fight the winner of the Andy Ruiz Jr. and Anthony Joshua rematch that happens on December 7, 2019, in Saudi Arabia. “Then after I knock Fury out, I’m looking forward to the winner of Joshua – Ruiz,” Deontay said. “Wilder says he thinks “Ruiz will get that one.”

It should be noted that George Foreman is still the GOAT amongst former boxers who now sell grills.