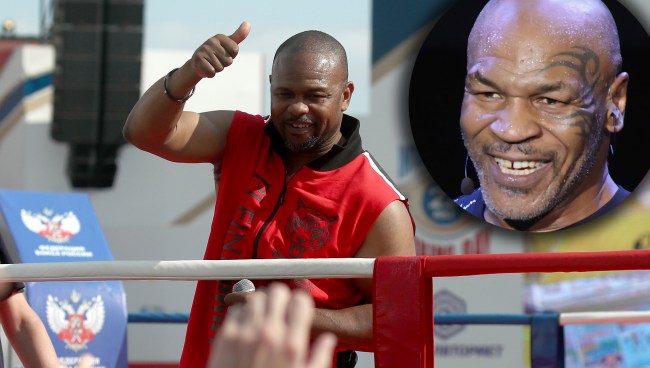 Roy Jones Jr. has had no shortage of complaints when it comes to his upcoming exhibition bout against Iron Mike Tyson.

He wasn’t happy with the fight being postponed over two months and rescheduled for Nov. 28 and almost dropped out of the event.

Jones said that if he wasn’t properly compensated for the impact the delay will have on his business he was done.

“I’ve had to cancel other stuff to be out here, it’s upset my calendar, I’ve got to change things,’ he told DailyMail.com.

“That’s why we have to table bulls–t now. That’s the biggest issue, I’m not a full time boxer anymore so I do other things to make an income. If I can’t do other things then I should be compensated for that, because it changes the schematics. It’s not acceptable.”

Shortly after those statements,the 51-year-old Jones admitted that he “made a mistake going in with him. He’s the bigger guy, he’s the explosive guy.”

And now this week, during an appearance on The Joe Rogan Experience, Jones once again complained about the upcoming fight with Tyson.

When discussing how the fight came to be and why he accepted, Jones told Rogan, “Six weeks, that’s right around the corner. He ain’t been fighting. I can get ready. I’m pretty sure I can get a little bit more ready than he can because he’s been inactive a lot longer than I had. So, six weeks. I know it’s Mike Tyson. He’s big as heck and he’s still Mike Tyson and he still can punch, but six weeks, there’s no way he can get prepared for this. So I said you know what, I’ll take that and I jumped on it.

“Well, lo and behold, something happens and they change. Now, why did they change it? What was the… did they give a reason? They said something about marketing, they told me something about marketing, but I don’t really believe much of what was said. I mean, I just can’t believe it, you know, because we had a September 12th day that was before football season start, basketball may have started, but people at home with nothing to do and that’s why I was like, you know what, I wanted him when I was in my prime so why not take him now? I mean, 12, I mean, six weeks, that’s easy.

“And they said well, we got more attention than we expected to get and this happened and that happened so we want to move it.”

Jones went on to talk about how, now with 12 weeks to prepare, Tyson has a much better chance against him. “His chance is still gonna be rough, but it’s gonna be better than it would have been in six weeks.”

Rogan then brought up how there’s no way this fight will be like a normal exhibition bout.

“When I read it was going to be an exhibition and they weren’t going to try to knock each other out, I went ‘get the f–k out of here,” said Rogan.

Then Jones discussed how the rules of the fight are slanted in favor of Tyson.

Watch the full conversation below…

The Tyson-Jones fight, as well as a bout between YouTube personality Jake Paul and former NBA player Nate Robinson, will be available live on cable, satellite and Triller for $49.99.