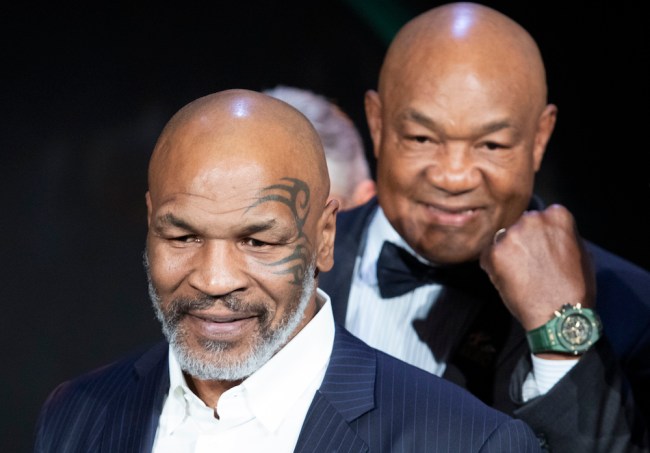 This week, “Iron” Mike Tyson and Roy Jones Jr. put pen to paper and announced a deal for an exhibition fight in September. The 54-year-old Tyson and 51-year-old Jones Jr. are coming out of retirement and both look amazing for their ages.

Tyson has already said he’s going after Jones Jr. with everything he’s got because he’s just one speed.

The only person going on record to say he’s admittedly nervous about the exhibition fight is a former world champion, George Foreman. Foreman did an interview with TMZ Sports about the fight and Big George isn’t sure fighting over the age of 50 is a good idea for either man.

“There’s a time when you gotta worry about your health, but it’s a beautiful thing that they would even come out,” said Foreman. “Maybe they can even name a charity or something for the recipient of the funds. I think it’s good to come out but its gotta be a fun thing, but I hope one does not hit the other.”

Foreman said he understands why both boxers want to get in the ring one more time. Foreman returned to boxing to capture a world title at the age of 45 and considering fighting again in his 50s. Thankfully, his wife talked some sense into the aging fighter.

Foreman’s wife was able to help the fighter find closer when it came to his career.

“She said, ‘George, isn’t that the way you want to leave the sport, believing that you can still do it?’. I got closure right there, and I walked away, and it was death to a fighter to realize you’re never gonna fight anymore.”

Foreman fears that either, or both, men could be permanently injured in the fight. TMZ asked former if he’d talk either man out of the fight if he had the opportunity. Foreman admitted it’s probably too late to get either man to back down.

“I would just tell them it’s really dangerous, but when you make up your mind to do something like that, you can’t tell them ‘don’t do it.’ They’re not gonna hear that. Even me. Big fool like me, back in the day, I only saw what I wanted to see.”