Training Video Of Mike Tyson Nearly Knocking Out His Trainer Emerges A Day After Roy Jones Jr. Admitted Fighting Tyson May Be A ‘Mistake’ 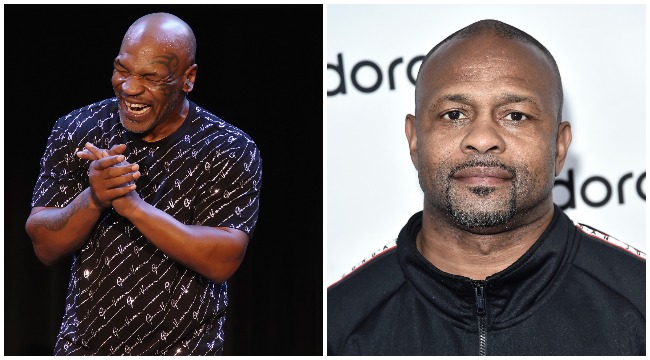 For those who tuned into the Joe Rogan Experience on September 5, you already know: Mike Tyson ain’t fucking around.

While he claims the upcoming fight with Roy Jones Jr.—his first in 15 years—is for charity, he was breathing into the mic for the entire two hour podcast in such a calm, menacing way, it sounded like he was KO’ing his own meat.

Tyson also talked about his physical abilities in a way that was entirely void of ego, maybe just the opposite, claiming that he struggles with the fact that he could possibly hurt somebody because it’s “orgasmic sometimes.” Like his power is a burden, a disease.

Not what you want to hear if you’re the Roy Jones Jr., who admitted to Sky Sports over the weekend that may have made a “mistake” stepping in the ring with a man who referred to the November fight as a “search and destroy” mission.

“He’s still Mike Tyson, he’s still one of the strongest, most explosive people who ever touched a boxing ring. If anything, I made a mistake going in with him. He’s the bigger guy, he’s the explosive guy,” the 51-year-old Jones Jr.  said.

If a world champion in four weight classes is worried about his safety stepping into the ring with you, you are probably the baddest motherfucker on the planet.

***WARNING: DO NOT CONSUME THE FOLLOWING CONTENT IF YOU ARE ROY JONES JR.***

Hey Roy,if you’re reading this, here is Mike Tyson talking to Rogan about being possessed with power. As a friend, just thought you should know.

“After my one round fights, some of them cost me losses because right after that, you think I’ve calmed down?

It’s still revving up. It’s not finished yet. It’s not dead yet. The energy of hurting somebody, continuing to hit somebody, it’s revved up.

…You have no control over it. It’s almost like you’re insane.”

Roy, you don’t have to do this.