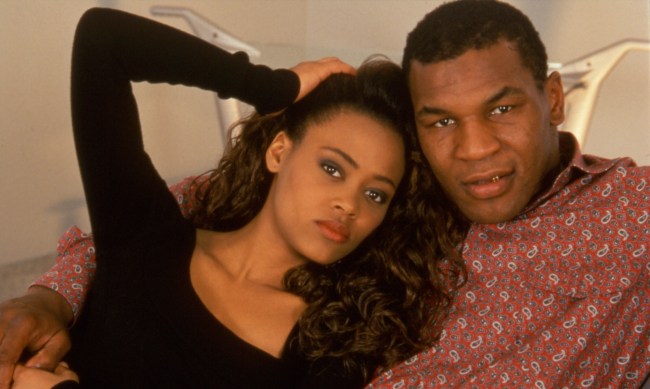 Back in June it was confirmed that a Mike Tyson biopic that Academy Award-winning actor Jamie Foxx had been trying to get made for years was finally happening.

Foxx first began discussing wanting to make a Mike Tyson movie back in 2009 and this summer Foxx revealed that he was getting in ridiculous shape to portray the former boxing champion.

One person was the opposite of excited about the biopic finally getting made is Riverdale actress Robin Givens who was married to Tyson for eight turbulent months in 1988.

According to Page Six, Givens’ attorneys sent Tyson and Foxx a cease and desist letter last month to “demand that Mr. Tyson cease and desist from further defaming Ms. Givens, and to put those producing, writing and/or directing the proposed Tyson biopic, and those producing Mr. Tyson’s podcast, on notice that they are to refrain from portraying Ms. Givens in a false, negative and defamatory light.”

The letter added, “While [she] has attempted to move on, she still finds herself fighting the abusive, demeaning and false accounts of their relationship by Mr. Tyson nearly 35 years later. It is time for Mr. Tyson to let this marriage be the relic of the past that it is.”

In a followup story, Givens, now 55, told Page Six, “It was a continuation of the abuse. I did not get one dime from my marriage. I left with absolutely nothing. I left the house, I wanted my life. I was a young person who made a terrible choice. A bad choice. That continuation and perpetuation of these things that are not true [was like] being punched all over again continuously.”

Back in July, Givens told Andy Cohen on SiriusXM that she “went and got the book that [Tyson] wrote and I was read it and there were so many things… that are so not true. It’s hard not to feel deeply disturbed by it.

Givens continued, “In a way, I hope I’m stronger because of this or going through this process, but it’s really a little upsetting. I think to be on the other end of what I’ve experienced and to have somebody say, ‘The best punch I ever threw was against Robin and she bounced one wall to the next and was out.'”

When reps for Tyson told Page Six there are no plans to depict his relationship with Givens in the film, she replied, “To say the least, it’s a relief.”