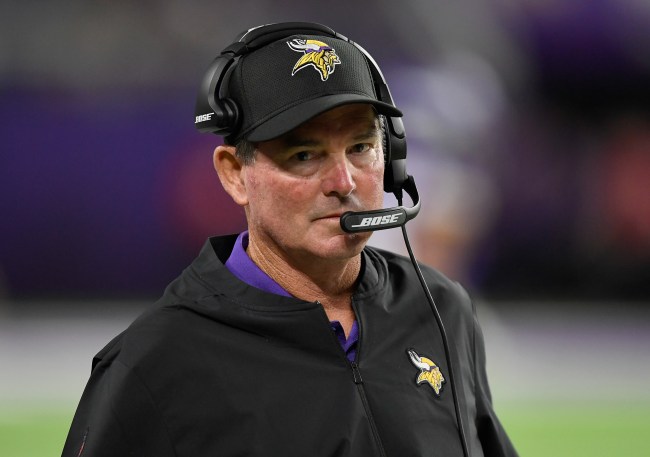 Mike Zimmer’s addiction does not wait for anyone or anything. The Minnesota Vikings head coach broke league policy last night (again) by packing a hammer during Sunday’s preseason game against the Seahawks.

Cameras blew Zimmer’s cover when they panned to the intrepid 63-year-old reaching in a David sunflower seeds bag and pinching out a wad of sweet snuff. It was a thing of beauty.

Let’s not forget, this isn’t the first time Zimmer got bagged for getting a buzz on mid-game. In 2015, Zimmer ducked behind an assistant coach to pack his bomb, another tactic that was unsuccessful.

The NFL released the following statement in 2015 after Zimmer was caught in 2015, per Sporting News:

NFL players, coaches, and other employees must not endorse or appear in advertisements for alcoholic beverages (including beer) or tobacco products. While fully recognizing that the use of alcohol and tobacco is legal, the NFL nevertheless has long been of the view that participation in ads for such substances by its employees may have a detrimental effect on the great number of young fans who follow our game. In particular, endorsements or other close identification of NFL players with alcohol or tobacco could convey the erroneous impression that the use of such products is conducive to the development of athletic prowess, has contributed to their success, or at least has not hindered them in their performance.

For the above reasons, players and other club and League employees (including game officials) must not use alcohol or tobacco products while in the playing field area or while being interviewed on television. Further, NFL policy prohibits the use or presence of alcoholic beverages, including beer, in club locker rooms at any time during the preseason, regular season, or postseason, including during the practice week and on game day.

Can we please bring back the days when coaches and players were allowed to rip heaters on the sidelines mid-game. Hall of Fame coach Tommy Prothro used to burn through four packs of cancer sticks A DAY. Try telling this motherfucker to curb his habit.

In honor of the #Chargers game tonight, here is ex-coach Tommy Prothro chain-smoking on the sidelines in 1975. The NFL needs more of this. pic.twitter.com/CMTazmexhh