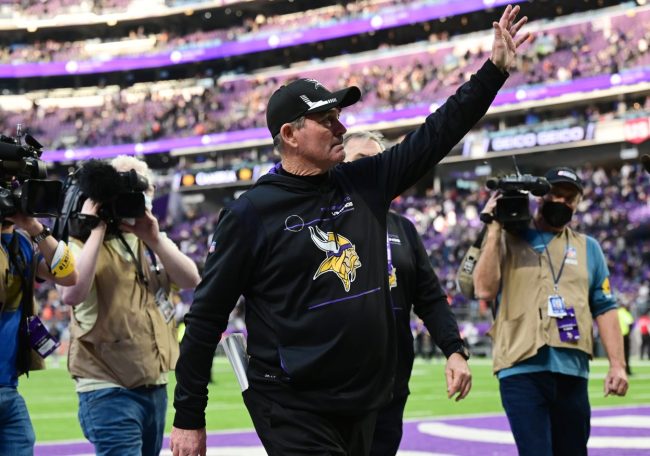 Mike Zimmer is no longer the head coach of the Vikings. The 65-year-old was fired alongside general manager Rick Spielman last week, marking the start of a new era in Minnesota.

The Star Tribune’s Vikings beat writer Ben Goessling took one final behind-the-scenes look at Zimmer’s time with the team and revealed a wild meeting that took place earlier this season. His entire piece, which can be found HERE, provides a very unique look into the relationship between the organization and one of its winningest head coaches, but the meeting stands out in particular.

According to Goessling, Zimmer called the meeting after “a key loss in the final weeks of the season.” That could have been after a loss to the Lions in Week 13, to the Rams in Week 16 or to the Packers in Week 17.

During the meeting, on the Wednesday after the loss, Zimmer reportedly gave a bizarre presentation. He spoke about “all the bad things that happened to him in his eight years with the Vikings.”

Among them, he discussed Adrian Peterson getting suspended in 2014 and Teddy Bridgewater’s knee injury in 2016. It was a discussion about things that have stuck with Zimmer over the years.

And from the sounds of it, it sounds like he was presenting all of the reasons that he couldn’t reach the Super Bowl, almost as if to give excuses. It seems really strange and the players agreed.

According to Goessling, the meeting “left players dumbfounded.” Understandably so.

Zimmer was fired not long thereafter.

Again, the full profile is extremely illuminating. It offers a great look into Zimmer’s time with the team, particularly the end.

The #Vikings begin coach and GM interviews on Sunday in search of a culture change, after eight years in a demanding environment ended with missed playoffs and worn-out players.

One final behind-the-scenes look at the Mike Zimmer era and how it ended: https://t.co/rGImIu3H0E

But the meeting is just downright bizarre. It sounds like Zimmer got up in front of his team and was extremely salty about the things that kept him from winning it all. Weird.