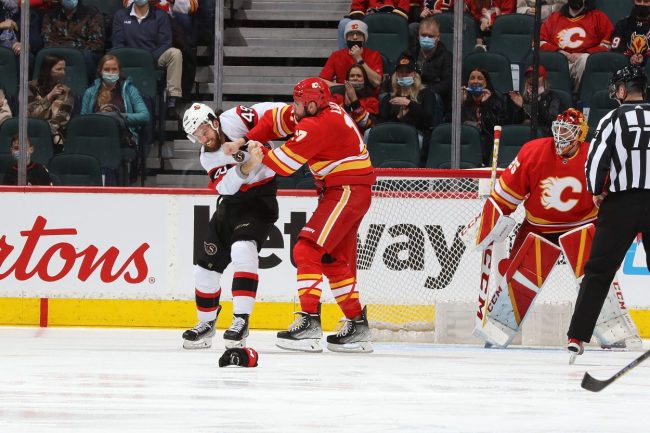 Milan Lucic turned back the clock on Thursday night and beat the brakes off of Scott Sabourin. The Flames’ 33-year-old winger dropped the gloves with the 29-year-old forward and put on an absolute clinic.

Down 2-0 early in the second period, Calgary lost a faceoff in their own corner. However, play came to a halt anyway so it didn’t matter.

On the far side, from the second the puck hit the ice, Lucic and Sabourin were off.

Lucic turned toward Sabourin, dropped his stick, took a step in his direction and dropped the gloves. Sabourin did the same.

At least, Sabourin tried to. Lucic just didn’t let him.

With his left hand grappled on Sabourin’s jersey, his right hand went to work. Lucic threw his opponent around like a rag doll, landing big punches along the way.

After about 25 seconds, Lucic sent Sabourin to the ice and the referees called it off. Ottawa went on to win the game 4-1, but Lucic won the fight.

Scott Sabourin heads to the locker room after dropping the gloves with Milan Lucic. pic.twitter.com/UbcHodSyJV

Sabourin, who returned to the ice for the first time since Nov. 14, will be out again, at least temporarily. Some time after dropping the gloves and getting rocked by Lucic, he dislocated his right ring finger and did not return to the contest.

Not only did he take the L, but he got injured in the process. Tough.

Meanwhile, here is what Lucic’s hands looked like after the skirmish:

Give ya one guess. @Sportsnet pic.twitter.com/EJAlk9xALi

This was not the first time that the two went at it. During his 1,000th game in the NHL last season, Lucic dropped the gloves with Sabourin to celebrate.

Sabourin got one good shot in the first time but Lucic cleaned up on Thursday.