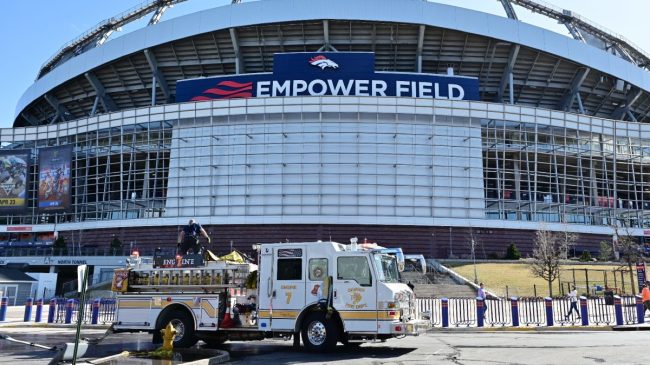 There was a surprising disturbance on Thursday afternoon inside of Denver’s Mile High Stadium.

Firefighters had to be called to put out some rather large flames inside of the Broncos’ home venue. The cause of the blaze is still unknown, though the crews were able to successfully evacuate bystanders before extinguishing the fire. There were no injuries reported.

A small fire that occurred in a construction zone near the East Club Lounge at Empower Field at Mile High has been contained by @Denver_Fire.

That area of the stadium was quickly evacuated as a precaution and there were no injuries sustained.

Fire now under control at Mile high Stadium. Sprinklers attempted to stop the fire, but firefighters were needed to complete extinguishment. Heavy fire & smoke was found on our arrival media briefing to take place at 3:00 p.m. on east side of stadium. @DenSafetyDept @CityofDenver pic.twitter.com/7AjPg1x1AN

Smoke could be seen from outside the stadium as passersby took a moment to film the scene from the interstate. Thankfully, the fire was able to be put out before anything got out of control.

Broncos' Mile High Stadium caught fire in a construction zone today; no injuries reported and fire has been extinguished

Why does it look like the stadium is burning? pic.twitter.com/e73GJgqEwf

With the flames doused and no injuries reported, fans took to social media to post the same comment. It circles around new signal caller Russell Wilson and a quote that dates back to the 2019 season.

Russell Wilson joined the Denver Broncos roster this offseason after being traded away from Seattle. The All-Pro passer has fans excited for the upcoming campaign, but this recent incident has caused social media users to ask one simple question.

“Did the Broncos let Russ cook a little too early?”

The saying goes back to Wilson’s 2019 season with the Seahawks. In a Week 3 loss to New Orleans, one viewer tweeted out the phrase, “Let Russ cook.”

In other words, give the quarterback more control of the offense.

The post took off, so much so that Wilson even trademarked the phrase the following season. With the recent fire at Mile High, fans are jokingly saying that the passer’s new team may have let him do that a bit too early.

Mile High fire is out with no apparent injuries so feel free to drop that “Let Russ cook” or “The smoke means we have a new owner/WB” joke that no one else has made yet. https://t.co/f5LvYEB7wD

@SABRSkeptic – Russ must have landed.

Russ not used to cooking at altitude

This is why you can't let Russell Wilson cook smh pic.twitter.com/4o4zN7sdeu

Is this why the Seahawks didn’t let Russ cook? 🤣

Joke aside. Hopefully no one got hurt 🙏🏽

Thankfully, no one was hurt. Russ and the Broncos will try to set a fire on the field this upcoming season.