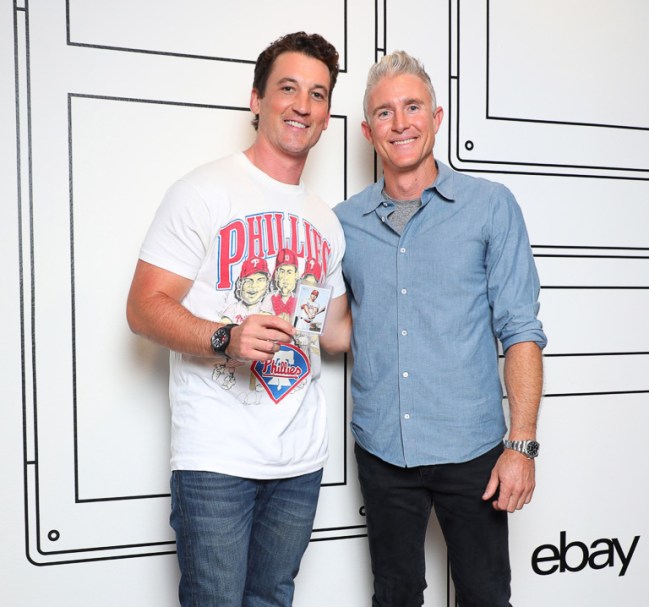 There’s an old saying about having a favorite baseball team: You don’t pick it; you inherit it.

That adage certainly applies to Miles Teller. Born in Downington, Pennsylvania and growing up in South Jersey before a move to Florida, Teller hasn’t been shy about wearing his Philly sports fandom on his sleeve over the years.

When the Philadelphia Eagles won the Super Bowl in February 2018, he was in Minnesota celebrating with his now-wife Keleigh Sperry.

Teller has long said that baseball was his “first passion“, before acting and music. Earlier this year, he told Jake Arrieta and Carl at The Starting 9 that sometimes people ask him if there’s anything he’d trade his Hollywood career for. He said he’d consider trading life as an actor to be a utility guy for the Phillies. 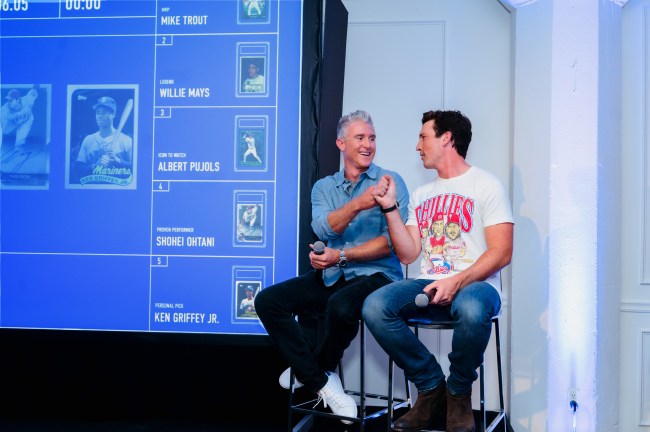 Together, Teller and Utley picked five rare rookie baseball cards, totaling $23,813.95. The selections were a mix of current MLB stars and beloved baseball icons, including:

In the spirit of the evening, Teller showed up rocking a vintage ’90s Phillies MLB Baseball Caricature shirt with John Kruk, Lenny Dykstra, and Darren Daulton.

Before the draft started, Teller told the crowd about how he became such a big Phillies fan.

How did Miles Teller become such a big Philadelphia Phillies fan?

“I grew up in South Jersey,” Teller explains. “My grandma, my dad’s mom, she was a die-hard Phillies fan. She used to take the bus to the spring training games. Growing up in Wilkes-Barre / Scranton, going to the minor league games. That would have been her dream if I had become a baseball player for the Phillies. The acting thing ended up…”

My grandma Teller, from Wilkes-Barre PA, never missed a game. Dorothy passed away last year, just shy of her 90th birthday. She was the heart and soul of my @Phillies fandom. Let’s ring a few more for her this year. pic.twitter.com/EYDxfqEmo5

“It’s just been a part of my life forever. If they said you could take a break from acting for two years and the Phillies will sign you, I would quit acting.”

Chase Utley added, “I think I could get you a try-out.”

It’s pretty cool to see (A. Teller gush about how his late grandma is why he’s such a hardcore Phillies fan. That’s some real talk that’s super endearing coming from one of the biggest actors in the world at the moment. Blood and sports fandom is truly one of the deepest bonds there is – there’s a lot of that in the Philly sports world. And (B. say he’d still trade his acting career for a chance to play ball with the Phillies, even after the mega-success of Top Gun: Maverick.

In a statement about the eBay Vault, Teller added:

“I’ve been a baseball fan my entire life. My grandma used to get me an 8-box set for Christmas every year when I was a kid, which led to me collecting baseball cards on eBay,” said Miles Teller.

“Having Chase – who I’ve been a fan of since he played for the Phillies – guide me through picking my Vault Stars lineup was exciting, and with eBay’s new vault I know my cards will be safe and secure. It’s a game-changer for me as a trading card collector.”

Now all Teller has to do is land that role as James Bond, manifesting his other grandma’s wildest wishes for her grandson.