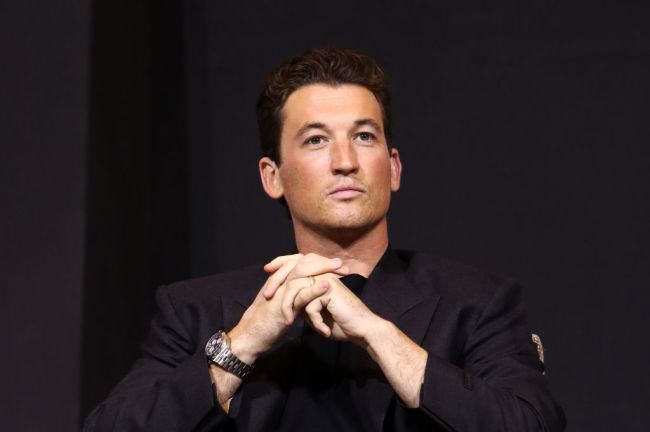 Buy the ticket, take the ride. And Miles Teller is having one heck of a ride right now.

Teller starred in three major projects rolling out in the course of two months, including an iconic role as Rooster in Top Gun: Maverick, which rocketed past the $1 billion box office mark. The 35-year-old also stars in The Offer on Paramount+ about the making of The Godfather (which is excellent, btw) and alongside Chris Hemsworth in Netflix’s Spiderhead.

While there are all kinds of Teller stans coming out of the woodwork this summer, no one is stanning the man harder than his own grandma, Leona Flowers.

On Twitter, Teller’s grandma proudly shared why she thinks her grandson should replace Daniel Craig as James Bond.

All important traits for the next person to step into 007’s shoes.

They’re looking for an actor to replace Daniel Craig for future 007 movies. I think my grandson, Miles Teller, has proven that he has everything they’re looking for- talent, looks, strength,worldwide appeal & oh, so cool. He can be that guy!! Wouldn’t he be great?

When someone questioned about him not being British, Teller’s grandma boosted that her grandson could “make you think he was.”

He could make you think he was👍🏻😊 https://t.co/b1cDM0ohJS

She added a salient point, noting that “many Europeans have played Americans” and that he studied accents.

And lots of Europeans have played Americans. He studied acting which includes accents. He’d be great. https://t.co/vxHnhQta10

Miles is very proud of his genetic connection to the British Isles. https://t.co/J3B5h2nYkf

Teller’s grandma is onto something here. James Bond producer Barbara Broccoli recently said that the next Bond film is two years away from production. When Deadline asked who was in the running to play James Bond next, she gave a non-answer, saying “no one at the moment.”

“Nobody’s in the running,” Broccoli tells Deadline. “We’re working out where to go with him, we’re talking that through. There isn’t a script and we can’t come up with one until we decide how we’re going to approach the next film because, really, it’s a reinvention of Bond. We’re reinventing who he is and that takes time. I’d say that filming is at least two years away.”

After speaking to No Time To Die director Cary Fukunaga this past fall, my colleague Eric proposed three other names after Craig’s departure: Michael Fassbender, John Boyega, and Richard Madden.

If it’s a complete “reinvention” of Bond, Teller doesn’t seem like a crazy idea at all. Especially considering his international appeal from Top Gun and box office draw.

TY Screen Rant 4 your piece on me. I know u & your followers want 2 c more of Miles. Everyone does! I think our English friends would welcome him as 007. The folks in London loved him when he was just there with the premiere of Top Gun Maverick. He even charmed William & Kate🇬🇧 https://t.co/OQYON4gzh3

Genetic reports show that I’m a hugely Irish. My paternal family-DEAN-immigrated from Galway. (Miles took me there a few yrs ago & I loved it🍀) My grandma was Scottish. We r grateful 4 all the influences that made us who we are. As everyone should be. Miles loves St Patricks Day

Well, Mr. Wayne, Tom has been a very good friend to Miles. I met him and he highly praised my grandson to me. He has been happy for having chosen Miles’ to be in his movie. He’s a good guy. https://t.co/siGFCuG7mK

She also gushed about Teller’s musical talents and his high IQ.

Yes, my dear, Miles plays many instruments well. He has so many talents & is so brilliant he amazes even his old Mup🥰 https://t.co/TxNjaDyw7J

Thanks for that. I loved Whiplash. It was a powerful film. Miles has a very high IQ as well. He could have done anything, but I know his fans are glad he chose acting! https://t.co/B4HlyN2C6Q

Appropos of nothing, Miles Teller’s grandma completely rules. It’s so endearing and heartwarming to see a grandma proudly go to bat so hard for her A-lister grandson. You just have to cherish that.

If you’re grandma’s still around, consider this a gentle reminder to call yours right now and say hello.

I’m going to call mine back in Pennsylvania and ask her about how her 66th anniversary dinner was last night.

I can’t wait to hear about it.

Page Six was nice enough to Tweet and cover my campaign promoting Miles as the next 007. Sadly, in the piece, he’s pictured with his OTHER grandma, the late and lovely Dorothy Teller. She adored Miles as well.