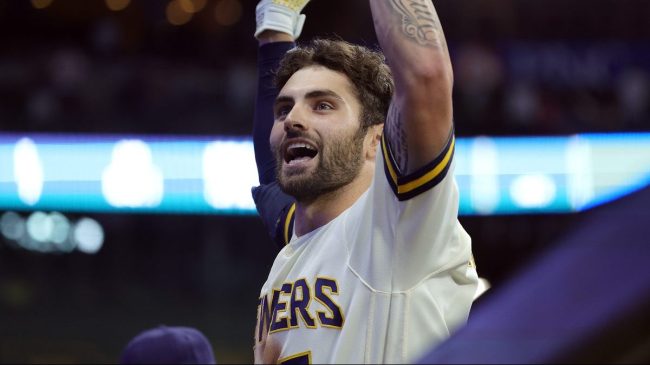 We’ve all been there. Both the fellas and the lady fellas among us. There are few worst things than being put in the friend zone with someone you want to be more than friends with.

Though at least most of us didn’t have to suffer the indignation of being told we’re stuck in the friend zone in public. Less yet in front of thousands and thousands of people.

That’s exactly what happened to one poor Milwaukee Brewers fan on Monday night.

Brewers Fan Gets Brutally Rejected Via Video Board Message

Let us start by setting the scene.

The last month or so has been a rough time for Milwaukee Brewers fans. The team has gone from three games up in the NL Central to a whopping six games behind the St. Louis Cardinals. Members of the team are calling out the organization’s front office, and the team entered Monday’s game with a 10-14 record in August.

Mid-way through Monday’s game against the lowly Pittsburgh Pirates, things weren’t looking much better. Milwaukee trailed Pittsburgh 5-3 after taking an early 3-0 lead. Then this happened.

Someone got friendzoned hard at the Brewers game… 😬 pic.twitter.com/ayghlj6EWL

Oh no…Mark, buddy. It’s hard to imagine a worse way of public humiliation than getting friend zoned in front of tens of thousands of already upset Wisconsinites. Hopefully for Mark’s sake no one else at the ball park knew who the message was directed toward.

And what if there are multiple Marks in attendance? Maybe someone got the wrong message? Baseball fans immediately sympathized with the poor fan.

Mark going through it. Been there https://t.co/J3WlVOSfdn

Pour one out for Mark https://t.co/zqGsoMVVkE

I just hope Mark didn’t pay for her or his tickets and dinner. https://t.co/hTXWgXwYVl

There is one saving grace for Mark. The Brewers went on a 4-0 run following the heartbreaking message to pull out a 7-5 victory. Former NL MVP Christian Yelich also had his back.

So Mark didn’t go home entirely unhappy. Unless, of course, Mark is a Pittsburgh Pirates fan. In that case, we feel for you, bud.

At least it’s not the worst someone has been hurt at Miller Park this month.