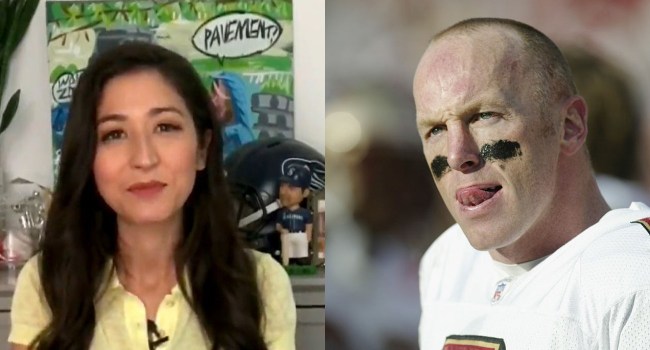 ESPN analyst Mina Kimes has responded to former NFL quarterback Jeff Garcia, who took to Instagram to question Kimes’ football knowledge and bemoan the fact that she has a platform to talk about the game.

Garcia had taken umbrage with comments Kimes had made about San Francisco 49ers quarterback Jimmy Garoppolo, who Kimes said is “the definition of being part of the group project that gets an A, while doing none of the work.”

As Kimes sarcastically points out, she’s far from the only analyst to question Jimmy Garoppolo’s recent play.

“Apparently I was the only person last week to point out Jimmy Garoppolo didn’t play well,” Kimes tweeted in response. The tweet has since been deleted.

Garoppolo, who has 302 yards, two interceptions, and zero touchdowns through two playoff games thus far, will look to lead the San Francisco 49ers to their second Super Bowl in three years on Sunday when they take on their NFC West rival Los Angeles Rams at SoFi Stadium in the NFC Championship game. The winner of that match will take on either the Kansas City Chiefs or Cincinnati Bengals in Super Bowl LVI on Sunday, February 13, 2022.

At this time, the Chiefs are the current favorites to win the Super Bowl with betting odds of +110. The Chiefs are then followed by the Los Angeles Rams at +175, the San Francisco 49ers at +450, and finally the Cincinnati Bengals at +800.