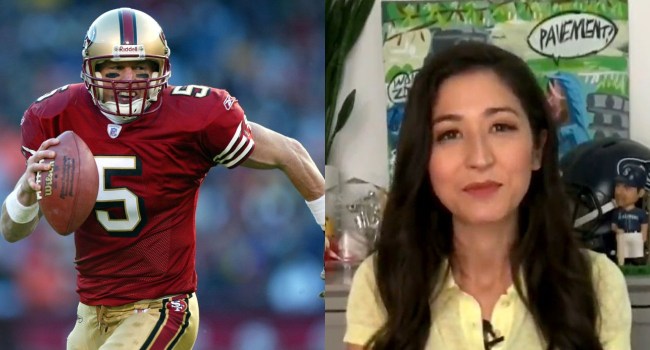 Garcia was responding to a comment that Kimes made about current Niners quarterback Jimmy Garoppolo while on ESPN’s First Take, saying that he is “the definition of being part of the group project that gets an A, while doing none of the work.”

According to Garcia, because she’s never thrown a touchdown pass in a game, he thinks it’s “hilarious” that she’s been given a platform to talk about the sport.

when insecure dudes can’t attack the points they attack the person. mina is brilliant and we’re lucky to have her. y’all be nice and not sad and angry like jeffrey here pic.twitter.com/kvEVoPiOPo

It would be interesting to see what Garcia thinks about brilliant San Francisco 49ers offensive coordinator Mike McDaniel, who’s also never played quarterback in the NFL.

The 49ers, with Jimmy G at the helm, will look to advance to their second Super Bowl in three years on Sunday when they take on the Los Angeles Rams in the NFC Championship game.

RELATED: The Brilliant Offensive Coordinator Of The San Francisco 49ers Hilariously Also Looks Like A ‘World of Warcraft’ Expert