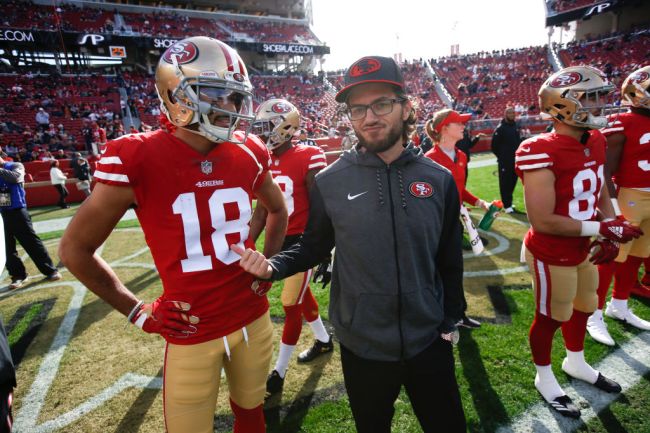 It’s a good thing our parents and teachers taught us to never judge a book by its cover because if we did, there’s simply no way we’d ever assume that San Francisco 49ers coordinator Mike McDaniel is actually a brilliant football mind.

I promise you there is not a brighter football mind in the League. pic.twitter.com/FT1NhAlpAx

From there, McDaniel followed Broncos offensive coordinator Gary Kubiak down to Houston as an offensive assistant when he took on the role of head coach of the Texans. He worked for Kubiak in Houston until 2009, when he was then hired by the Sacramento Mountain Lions of the United Football League as a running backs coach.

After two years in the now-defunct United Football League, McDaniel made his return to the National Football League when he was hired as an offensive assistant by his old pal Mike Shanahan, who then promoted him to wide receivers coach in 2013. A year later, McDaniel made the move to Cleveland, where he served as wide receivers coach Mike Pettine before taking on the same position for the Atlanta Falcons the following season.

His big break then came in 2017 when new San Francisco 49ers head coach Kyle Shanahan hired McDaniel as the team’s run game coordinator, a role he served in until he was promoted to offensive coordinator in early 2021.

If the San Francisco 49ers can make a run in their year’s playoffs, McDaniel will certainly be a name that’s tossed around as a potential head coach in the coming years, as the league seems to be trending towards hiring young, bright minds over old-school experience.