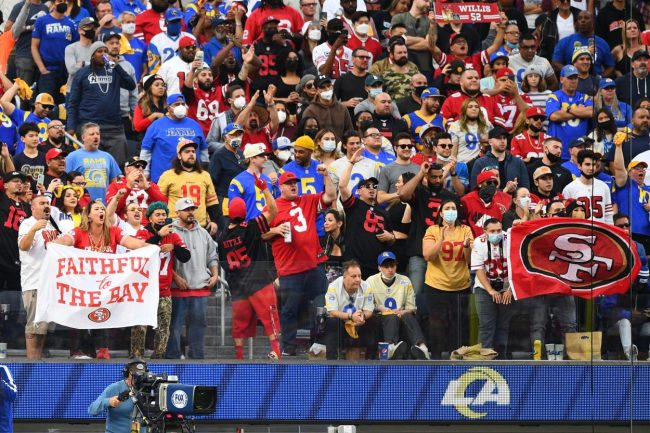 The Los Angeles Rams fell to the San Francisco 49ers in overtime of Sunday’s game at SoFi Stadium. After the game, quarterback Matthew Stafford discussed the crowd at the game and blamed part of the loss on the home fans being outnumbered.

The Rams announced an official attendance of 74,447 fans at the game.

While there is no way to know exactly how many of those in the stands were San Francisco fans, they appeared to be the majority.

Not only did Stafford express the lack of home field advantage, but head coach Sean McVay also addressed the crowd.

“It did catch us off guard,” he said. “Just because of the way that it’s been this year. It’s been great, great atmosphere, great environment. Yesterday was the same thing, but there was a lot of red there. That was definitely a surprise.”

49ers defensive end Arik Armstead spoke about how loud it was and said even his team had trouble hearing in certain instances.

Arik Armstead on the crowd noise from 49ers fans at Sofi pic.twitter.com/oL1S6OkNZl

In addition to those who were on the field, Stafford’s wife Kelly spoke about the San Fran takeover. She revealed a shocking tidbit of information that makes it very clear just how loud it was in SoFi Stadium.

Kelly said that she had never seen that many opposing fans at a game, and her husband played in Detroit. She shared that the Rams had to run a silent snap count in their home stadium, which is truly unprecedented.

Kelly Stafford the wife of #Ramshouse QB Matthew Stafford has a message for Rams fans this Monday nite:

Ahead of Monday night’s Wild Card game, Kelly encouraged Rams fans not to sell their tickets to Cardinals fans. She doesn’t want to see her husband have to run a silent count at home during the playoffs.