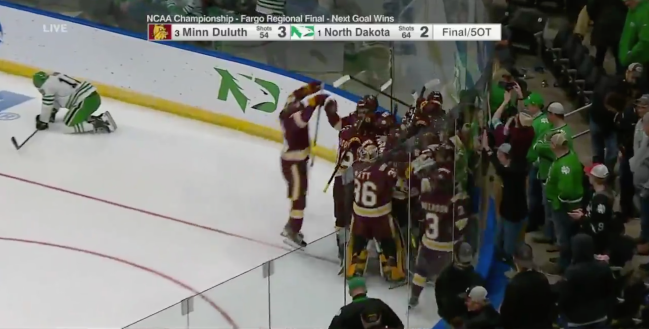 The puck dropped between 3-seed Minnesota Duluth and No. 1 overall seed North Dakota at 6:32 p.m. CDT on Saturday from Scheels Arena in Fargo, North Dakota. Five overtimes later, the longest game in NCAA Tournament history ended with a 3-2 victory in favor of the underdogs to advance to the Frozen Four after six hours and 10 minutes. While the call is extremely underwhelming, and the broadcaster says eighth overtime instead of eighth period before panicking and going silent, the emotion on the ice does the talking.

Freshman Luky Mylymok scored off of the rush for the Bulldogs and netted only his second goal of the season through the five-hole of Hawks goaltender Adam Scheel at the most pivotal moment.

Despite what the seeding says, Minnesota Duluth is not a Cinderella story by any stretch of imagination. Head coach Scott Sandelin’s team is headed to its fourth consecutive Frozen Four, the first to do so since North Dakota from 2005-08, and extended its NCAA Tournament winning streak to nine games. The defending back-to-back national champions from 2018 and 2019 had their opportunity to three-peat wiped out by COVID-19 last year, but are only two wins away from claiming another title this year.

“Unbelievable game,” said Sandelin. “North Dakota shows their resolve, comes back, ties it. Then we play a marathon overtime and we get a big goal from a freshman that got some ice time later in the overtimes. I couldn’t be more proud of this group. I thought our guys played great. It was a great hockey game too. Two good teams going at it. We got the fortunate break and the goal. Thank God it ended.”

While coach is glad it ended in the fifth overtime, the Bulldogs nearly ended it regulation, and again in the first overtime. The Hawks fell behind 2-0 with two minutes left to play in the third period and pulled their goalie. They then scored two goals in 80 seconds to force the extra period.

North Dakota nets a pair in just under a minute to send the game to OT!
pic.twitter.com/j3vIf1i6EJ

Just over eight minutes later, 7:33 into the first overtime, Koby Bender fed Kobe Roth for what would have been the winner for Minnesota Duluth. However, the goal was reviewed and Bender was deemed offside on the zone entry and the goal was called off. Thus, the two perennial powerhouses played on, passing the previous record for the longest game in postseason history at 123 minutes and 53 seconds, set by St. Lawrence and Boston in 2000.

While Mylymok’s goal secured the win, it was UMD’s goalies who deserve to be the players of the game. Sandelin made an interesting decision to put Zach Stejskal in net, giving him just his eight start of the year and first action since the final two games of the regular season. He finished with 57 saves on 59 shots, conceding goals only on the 6-on-5 flurry at the end of regulation.

However, Stejskal cramped up 15 minutes left in the fourth overtime and had to be replaced by Ryan Fanti. Fanti started 19 games in 2021, but he entered cold in a crucial situation with a ton of pressure. He blocked six shots in 17:36 of relief work and helped seal the win.

First shot, no problem for Ryan Fanti, who enters the game for Zach Strejskal after he leaves in 4OT for cramping. @UMDMensHockey pic.twitter.com/YOEhBH60KP

Due to strict COVID-19 protocols, teams are asked not to shake hands or meet with one another in postgame. However, after such an epic, lengthy battle, the Bulldogs went over and congratulated their opponents on a great performance. Scheel, who conceded the game-winner, was particularly shaken up and Fanti went over to let him know what an incredible job he did in net. Combined, both goalies saved 114 of 119 total shots. Sheesh.

Incredible sportsmanship from Fanti here to go over. What a battle by both teams, it is tough that someone has to lose, but that’s what makes it so entertaining. What a game by Minnesota Duluth and North Dakota. pic.twitter.com/LhZmz9ftJs

Minnesota Duluth will face UMass in the semifinal, just their second postseason game of 2021 after advancing on a no contest in the first round when Michigan pulled out due to a COVID-19 outbreak. It will be the first time in school history that both the mens and the women’s program will be in the Frozen Four at the same time. Great year to be a Bulldog. If you want to get a feel for all five overtimes, the highlight package from the game is sixteen minutes long: