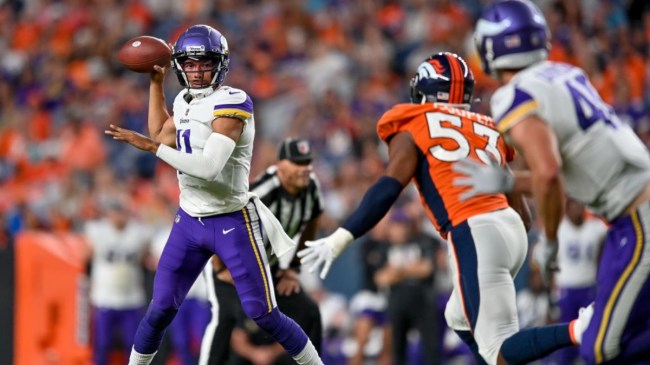 In the 3rd round of last year’s NFL Draft, the Minnesota Vikings took a shot at finding themselves a long-term answer at quarterback with Kirk Cousins’ contract getting ready to expire and the quarterback heading toward the later stages of his career.

Last season, Mond attempted only 3 passes for the Vikings despite the fact that Kirk Cousins missed Week 17. The Vikings opted to start Sean Mannion that week and barely gave Mond a look even though they got crushed and were out of the playoff picture.

After the game, the Vikings’ coach said he didn’t need to see Mond play.

This week, the Vikings cut Mond and opted to go looking for a backup quarterback in free agency.

Today, their new head coach spoke about the decision and found the nicest way to say that he wasn’t ready to be a backup QB in the NFL.

Kevin OConnell said he thinks Kellen Mond will have a “heck of a football journey” ahead of him but felt it “wasn’t fair” to ask him to be the No. 2 QB being one play away from being called upon to start

Here is the full quote from O’Connell:

“I think he’s got all the things you look for in an NFL quarterback,” O’Connell said. “You can put a lot of pressure on a player if he’s not ready. In my personal opinion, I still think Kellen’s got tremendous upside but to ask him to be that No. 2 quarterback, being a snap away on a team we feel very strongly about competing. I didn’t think that was fair to Kellen.”

Mond has already been picked up by the Cleveland Browns. The Browns likely won’t need Mond to be their QB2 any time soon with Jacoby Brissett and Josh Dobbs currently ahead of him and Deshaun Watson returning in Week 13.

If you ask the head coach of the Minnesota Vikings, that’s what’s best for Mond at this point in his career.