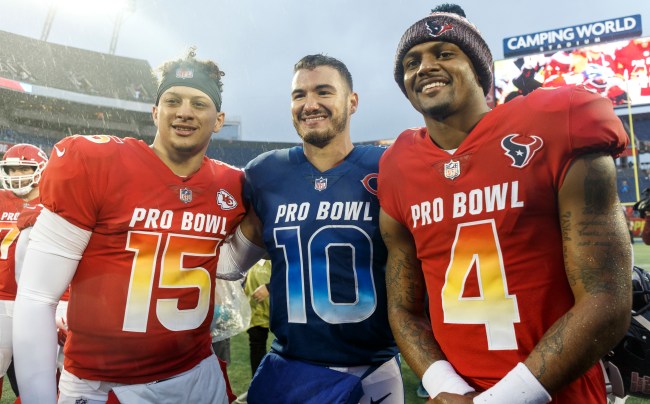 Here’s a little fun fact for your dome piece: did you know that Chicago Bears quarterback Mitch Trubisky was selected ahead of both Deshaun Watson and Patrick Mahomes? I’m kidding — of course, you knew that! Everyone knows that! It’s essentially common knowledge at this point, as the NFL seemingly loves to remind fans every time the Bears are on national television.

And with that second overall pick, instead of drafting immediate franchise stalwarts such as Patrick Mahomes or Deshaun Watson, the Bears went with one-year University of North Carolina starter Mitch Trubisky. And, well, we all know how that’s turned out.

To be fair to Mitch, it’s not his fault that Bears’ scouting department didn’t have a competent eye for talent — he didn’t ask to be selected ahead of two potential future Hall of Famers. Nevertheless, life is unfair, and as a result, Trubisky will be compared to those two infinity superior quarterbacks for the rest of his career.

But while fans use this quarterback trip “fun fact” as a way to clown on the Bears and Trubisky, how does the man himself feel about the comparison?

Speaking to reporters ahead of the Bears Week 16 matchup against the Chiefs, Trubisky acknowledges that the comparisons “are never going to stop.”

“The comparisons are out there and they are never going to stop. It’s kind of me, Pat and Deshaun are kind of all grouped together because we are in the same draft class, drafted in the first round and all that. But there are no do-overs. We are where we are,” Trubisky said.

“Our careers are going in different paths and they will for the rest of time and they’ll be compared against each other,” Trubisky said. “It’s just the nature of the beast, but I’m in competition with myself and just trying to be the best version of me and go out there and win games for the Chicago Bears. It’s just something that I can’t control. It is what it is. But two good guys to be compared to. Hopefully we just keep getting better and help the league.” [via ESPN]

While it’s still too early to write off Trubisky’s career as a whole, we definitely have enough evidence at this point to safely conclude that he’ll likely never hit the same highs as Mahomes and Watson.