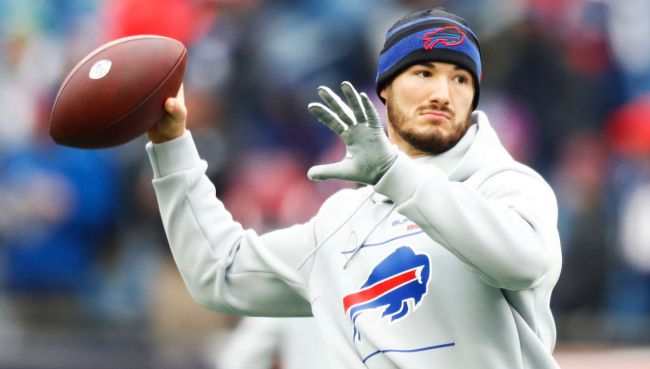 Former first-round pick Mitch Trubisky, who spent the 2021-22 season backing up Josh Allen in Buffalo, is set to sign with the Pittsburgh Steelers.

According to reports from ESPN’s Jeremy Fowler, Trubisky’s decision came down to the Steelers and the New York Giants. Trubisky ultimately chose the Steelers, Fowler reports, because he believes it gives him “the best chance to get back on the field as a starter and win games.”

Following the news of Trubisky’s signing, NFL fans took to social media to react to the prospect that the UNC product could be the Pittsburgh Steelers’ next starting quarterback.

Mitchell Trubisky is your new starting QB in Pittsburgh.

“Hey Mason, we just wanted to call and let you know we signed Mitch Trubisky to a two-year deal.” pic.twitter.com/3nbOgD4akt

Mitch Trubisky to the Steelers! That’s my QB1! pic.twitter.com/FdsefslwhN

Mitch Trubisky is so good he took the Bears to the playoffs and made Matt Nagy coach of the year. Just facts.

Trubisky — who is now tasked with taking over a position filled by future Hall of Famer Ben Roethlisberger for the previous 18 seasons — was originally drafted out of the University of North Carolina by the Chicago Bears with the second overall pick in the 2017 NFL Draft, who famously selected him over Super Bowl winner Patrick Mahomes.

During his NFL career, the 27-year-old signal-caller has completed 64.1% of his passes for 10,652 yards, 64 touchdowns, and 38 interceptions. After four seasons as the Bears’ starting QB, Trubisky spent the 2021 season in Buffalo as Josh Allen’s backup.

Trubisky certainly joins a competitive division, as the Steelers’ divisional rival Cincinnati Bengals reached the Super Bowl this season on the back of Joe Burrow’s breakout year. There’s also former MVP Lamar Jackson and the Baltimore Ravens, who will likely bounce back after a disappointing 2021-22 season that saw them miss the postseason.