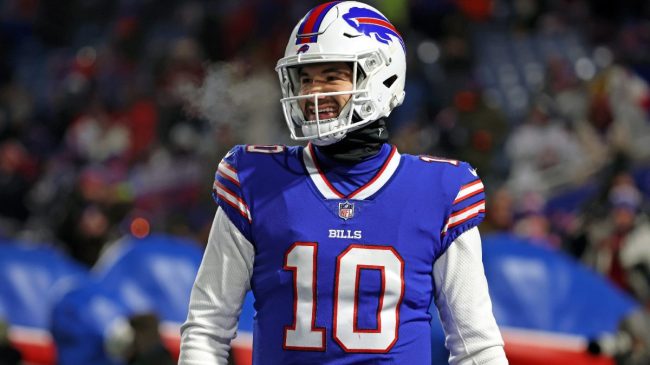 The Pittsburgh Steelers picked up their replacement for future Hall of Famer Ben Roethlisberger earlier this week.

QB Mitchell Trubisky will take over under center for the organization when the 2022 season rolls around. Trubisky officially inked a deal with the Steelers on Monday.

It didn’t always appear that the signal caller would land in Pittsburgh, though. Trubisky had a number of interested parties knocking on the door.

A former first-round pick, he spent four seasons in Chicago before last year’s stint with the Bills. While he’s largely failed to live up to that top pick status, his strong arm and ability to move outside the pocket get teams thinking of his high-ceiling potential.

And the Steelers made a living off of having a strong passer with the ability to shake off pressure and create on the fly. They’re hoping that continues with Trubisky.

The quarterback’s final decision came down to two suitors. Those were the Steelers and the New York Giants. Trubisky ultimately chose Pittsburgh for one big reason.

Mitchell Trubisky Unveils His Reason For Picking The Steelers

Trubisky was a four-year starter with the Bears, but he saw his playing time take a major dip last season in Buffalo. Working as Josh Allen’s backup, Trubisky saw action in just six games, attempting only eight passes on the year.

That was a major downgrade after making 40 starts over the previous four campaigns.

Pittsburgh offered the passer the quickest opportunity to get back in the driver’s seat.

Mitchell Trubisky's decision came down to the Pittsburgh Steelers and the New York Giants. He was looking for the best chance to get back on the field as a starter and win games.

In Pittsburgh, he’s only competing with career reserve Mason Rudolph while the Giants still have former first-round choice Daniel Jones in the QB room.

The path to playing time is a much simpler one with the Steelers.

Trubisky is already the favorite to take over for Ben Roethlisberger in 2022. We’ll see if the investment pays off for Pittsburgh next year.