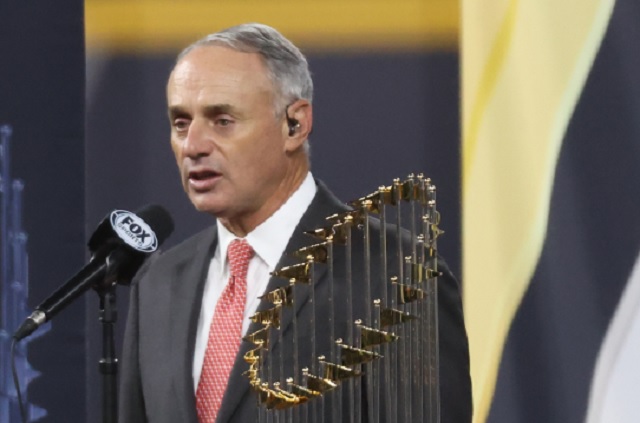 After game 6 on Tuesday night, Manfred was seen slurring his words while presenting the World Series MVP award to Corey Seager.

Rob Manfred, who has to be shit faced, presents Corey Seager with the #WorldSeries MVP award. #Dodgers #LATogether pic.twitter.com/nKTbex3VSD

Manfred continued to talk in a strange manner while being interviewed on the field moments later.

Fans didn’t know what to make of Manfred’s bizarre behavior.

Rob Manfred utilizing the super rare but super effective “publicly speak like you drank a fifth of jack and are having a seizure” strategy to avoid any follow up questions on Justin Turner’s COVID test.

Is Rob Manfred ok? I’ve never heard him speak like that. Very slow and slurred. Sounded stroke-like. I hope he is ok.

Did Rob Manfred just have a stroke on live TV? #postseason pic.twitter.com/2q26jHvrzR

They need to have Rob Manfred talk to a doctor ASAP

I hate Manfred, but honestly concerned he's having a stroke.

Some people suggested Manfred was having issues speaking because he had a bad echo in his earpiece.

For those asking- Manfred likely had the awful earpiece/PA echo, where if you still have the broadcast earpiece on and your voice is on the PA it will create a horrible echo in your ear and cause real problems speaking.