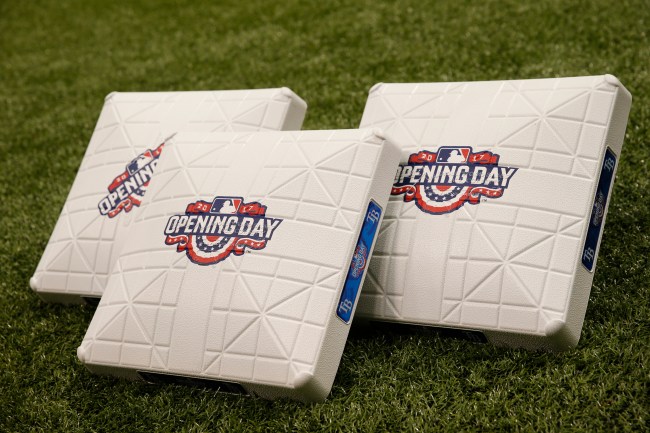 ST. PETERSBURG, FL - APRIL 2: The Opening Day logo adorns bases prior to the start of a game between the Tampa Bay Rays and the New York Yankees on April 2, 2017 at Tropicana Field in St. Petersburg, Florida. (Photo by Brian Blanco/Getty Images)

MLB has introduced Hankook Tire as the Official Tire of Major League Baseball, in both the United States and Korea. The multi-year sponsorship agreement will provide Hankook with exposure across MLB’s media assets (i.e. MLB Network, MLB.com, social) and in-park at “jewel events” like the ASG. Virtual ads behind the plate during post-season broadcasts will also help the tire manufacturer achieve its goal of “reaching millions of baseball fans not only in the U.S. but around the world.” Financial terms of the deal were not disclosed. Hankook becomes the 6th (7th overall) publicly traded company (or subsidiary of a publicly traded equity) to partner with MLB since January.

Howie Long-Short: Hankook Tires, the 7th largest tire company in the world (based on sales), trades on the South Korea Stock Exchange under the symbol (KRX: 161390). The company reported FY17 sales increased +2.9% YoY (attributing the growth to sales of over 17-inch high tires), but the rising cost of raw materials drove operating profit down -28% YoY (to $701 million). In 2018, the company will look to position itself as a “premium brand”; with plans to expand sales of high-inch tires in major markets and to supply OE tires for new models of major high-end auto brands.

For reference purposes, the other 5 MLB partners to have signed on in 2018, that you can invest in are:

Fan Marino: All 30 teams in MLB were scheduled to play today, Opening Day (the earliest start date ever), for the first time since 1968; but, “impending inclement weather” in Cincinnati is going to prevent that from happening. The Reds/Nationals game (Bailey vs. Scherzer) scheduled for 4:10p, has been postponed until tomorrow (Friday 3.30). The rainout is particularly notable as Cincinnati hosted the “opener of Openers” every year (except 2, see below) between 1876-1989.

Nike has signed an 8-year extension to remain the NFL’s game-day uniform and on-field apparel supplier. The company will also continue to issue cleats and gloves to players who maintain individual endorsement deals with the brand. As part of the long-term agreement (’21-’28 seasons), Nike has agreed to participate in “several programs; including youth and player initiatives.” Financial terms of the deal have not been disclosed.

Fan Marino: It’s safe to assume the deal’s value at least matches the $1 billion commitment (over 8 years) Nike (NKE) made to the NBA in June of 2015. While NKE has the NFL and NBA under long-term contracts, Under Armour (UAA) landed MLB’s uniform contract with a 10-year commitment (no terms disclosed) in December 2016; replacing Majestic Athletic. Adidas (ADDYY) has contracts in place with both the NHL (7 years, estimated $490 million) and MLS (6 years, $700 million) through ‘24.

Howie Long-Short: The 10-year deal that MLB signed with Under Armour (UAA) was supposed to begin in 2020, but Fanatics’ May ‘17 acquisition of VF Corp’s (VFC) Licensed Sports Group (which included Majestic Athletic) expedited the timeline. Fanatics’ $225 million acquisition means that UAA and Fanatics fan gear will now be available in time for the MLB 2018 season (including the postseason dugout collection) and Under Armour uniforms will be on-field for Opening Day 2019.

Historically speaking, MLB teams relied on “local suppliers lacking baseball expertise” to provide their infield dirt; resulting in a dry, chunky mix prone to bad hops. That’s no longer the case, as highly specialized groundskeepers studying “soil science” are sourcing dirt from around the country in search of “just the right mixture of sand, clay and silt to provide a smooth, predictable surface.” It’s not just “engineered soil mixes” that MLB teams are bringing in though, “black gumbo” clay (helps with footing) and crushed brick or lava rock (durable material) are also being nationally sourced for use on pitchers’ mounds and warning tracks.

Howie Long-Short: MLB quality dirt mixes range between $80-$100/ton (+ freight), roughly 4x the cost of “ordinary” dirt. Teams replacing the entire non-grass portion of a MLB infield could be looking at a bill upwards of $50,000.

Fan Marino: The biggest difference between the dirt on a MLB baseball field and on your local little league baseball or softball field is the amount of clay contained within the blend; “a binder that helps with consistency and resilience.” The dirt your little tyke plays on is going to be “sandier”, as it’s cheaper and easier to maintain.