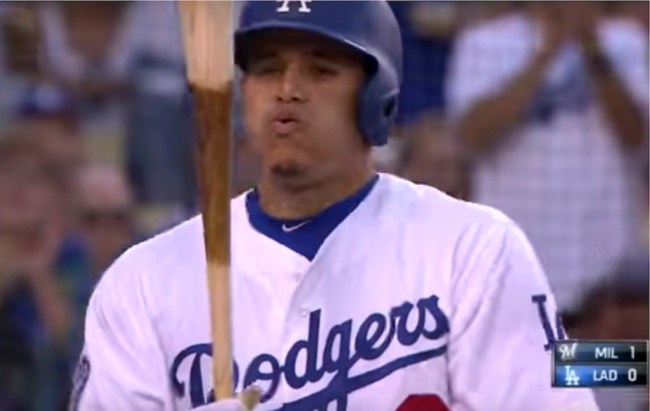 The MLB playoffs are a time of year when every single ballplayer should be doing pretty much anything he can do to help his team reach the World Series. From laying down a sacrifice bunt to stealing a base to get into scoring position to pitchers using pine tar to get a little edge on hitters, October baseball is where guys should lay it all on the line.

Well, while every baseball player would, seemingly, give his left nut to compete for a World Series title, Los Angeles Dodgers star infielder Manny Machado doesn’t seem to be among them. It’s not that Macahdo doesn’t want to survive and advance in this year’s MLB playoffs, it’s that he doesn’t seem to understand what it takes to give his all for the good of the team.

Don’t believe me? Just ask him about his hustle — or lack thereof.

That’s according to an interview he did with FS1 that’s scheduled to air prior to Game 4 of the NLCS, per The Athletic, with Manny Machado sure coming across as a prima donna, lazy son-of-a-bitch.

“Obviously I’m not going to change, I’m not the type of player that’s going to be ‘Johnny Hustle,’ and run down the line and slide to first base and … you know, whatever can happen. That’s just not my personality, that’s not my cup of tea, that’s not who I am.

“Should I have run on that pitch? Yeah … but I didn’t and I gotta pay the consequences for it. It does look bad. It looks terrible. I look back at the video and I’m like, ‘Woah, what was I doing?’ You know, just the emotions of the game. … I’m the type of player that has stayed in the zone, I’m playing and I’m just in the zone.”

Uh, what? Dude, it’s the F’in MLB playoffs and you’re admitting to this? Where’s the veteran in the clubhouse who chews Machado out for being so candid?

Don’t get me wrong, the guy’s on the hook for a monstrosity of a contract in just a few months, but saying this type of sh*t has to be off-putting to a few front offices who expect a guy (potentially) going to make $30 million a year to give more of an effort. And, because Manny Machado continues to rake in the NLCS — he’s hitting 5-for-11 with one homer and three RBI — his Dodgers manager, Dave Roberts, sees nothing wrong with Machado’s “cup of tea” being smacking the snot out of the ball and not hustling.

“There’s no perfect player,” said Dodgers manager Dave Roberts. “A guy that posts every inning is hard to come by these days. For me, the net, it’s not even close.”