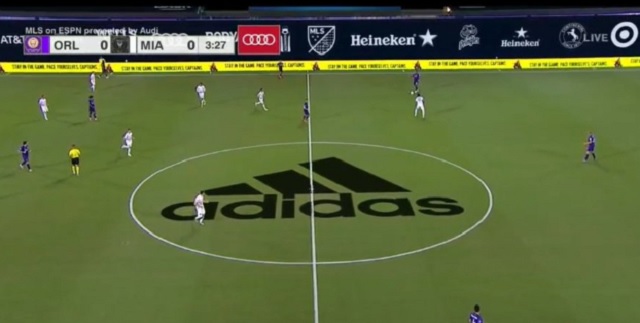 The MLS returned on Wednesday night with Orlando City and Inter Miami kicking off the MLS is Back tournament but fans were focused on the huge Adidas logo in the middle of the field.

According to Front Office Sports, the MLS is using brand integration during their games as a part of the league’s plan to incorporate sponsors during matches.

In addition to enhanced audio and camera angles, MLS will also deploy virtual technologies to incorporate fans and sponsors during matches, according to Seth Bacon, the league’s senior vice president of media. No specific plans were laid out.

NYCFC CEO Brad Sims said the league is “going to create as much [sponsorship] inventory for these games as possible,” which will include green screen digital boards alongside the pitch in addition to traditional LED field boards. Those virtual positions will be split between league and club partners. For the clubs, that will allow them to provide make goods to local partners, who will gain additional value given that all matches during the tournament will be nationally broadcast.

The MLS may have gone too far when they superimposed a huge Adidas logo in the middle of the field which seems to have annoyed fans.

Tonight’s first game of the MLS is Back Tournament features a virtual adidas logo at the center of the field. pic.twitter.com/HfV5U50N1K

Graphics team: How big would you like the Adidas logo to be?

It took me less than 2 minutes to start bitching about this camera angle and gigantic adidas logo in the middle of the pitch.

I didn’t miss sports. I missed complaining about them. #MLSisBack

why does the adidas logo got to be so big pic.twitter.com/zL8zFIegkq