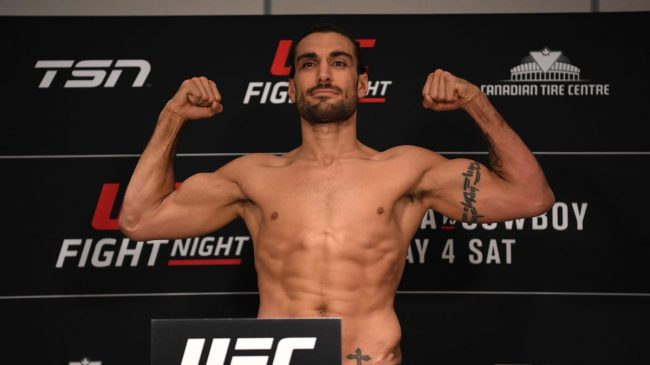 The mixed martial arts community, particularly in Canada, suffered a tragic loss over the weekend. Former UFC middleweight Elias Theodorou, known affectionately as “The Spartan,” passed away at the age of 34 after a battle with cancer.

Theodorou made the UFC in 2014 by virtue of winning The Ultimate Fighter: Nations tournament. He then put together a five-year UFC career with an 8-3 record in the company. He was 22-3 overall with notable wins Eryk Anders and Sam Alvey.

But Theodorou was also popular out of the cage. He was active on Twitter and a fierce advocate for the use of medical marijuana in combat sports. In 2020, he became the first fighter to receive a therapeutic use exemption for medical marijuana.

The charismatic Canadian was also a contender on season three of The Amazing Race: Canada.

Theodorou cut a popular figure in the MMA world and in UFC locker rooms. His engaging, comedic personality made him a friend to many in the company.

Those friends are now mourning and shared tributes across social media on Monday. UFC president Dana White shared a graphic on his Instagram story honoring Theodorou.

Wow. Loss for words on hearing the news on one of the nicest guys I’ve met in this sport. #RIP Elias. This is saddening

Wow. Loss for words on hearing the news on one of the nicest guys I’ve met in this sport. #RIP Elias. This is saddening

Fight promotion Invicta also remembered Theodorou, who once served as a “Ring Boy” for the company.

A member of the @InvictaFights family has sadly passed from his battle with cancer. Our sincere condolences to his friends and family. Elias was truly a kind, humble and charismatic personality who will be missed greatly by all. #RingBoy pic.twitter.com/20nkgnLZgU

UFC Welterweight Michael Chiesa recalled a moment when Theodorou literally gave him the shirt off his back.

Plenty of others weighed in as well.

Horrible news to see, Canada lost a great one 🇨🇦

I can't believe! terrible news! RIP my friend Elias Theodorou 🙏🏾😞 it’s was a pleasure to share the octagon with you my brother