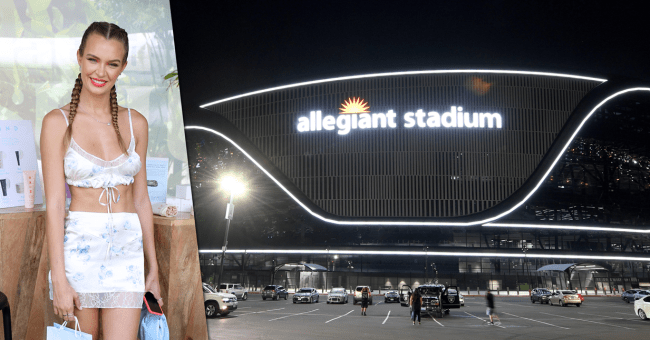 When you think of the perfect place to hold a wedding what comes to mind? In a church? On a beach? On a mountaintop? Inside the Las Vegas Raiders’ new gazillion dollar football stadium? If you are supermodel Josephine Skriver that last one is the choice.

Skriver, who has modeled for companies like Victoria’s Secret, Dior, Gucci, and the Sports Illustrated Swimsuit Issue, has been a diehard Raiders fan ever since she watched ESPN’s Straight Outta L.A. “30 for 30” documentary.

“I was like, oh my God, this fan base is amazing,” Skriver told the Boomer and Carton show in 2017. “Couldn’t wait to be part of the whole Silver and Black.”

She’s no poser either. Skriver regularly makes Raiders posts on Instagram, especially during football season, showing her support for the team.

Back in 2020, Skriver attended Super Bowl 54 rocking her Raiders gear.

“Is it okay to wear your team’s jersey to the super bowl even when they aren’t playing? Because I wear @raiders gear everywhere and don’t care what anyone says,” she wrote on Instagram at the time.

In fact, Skriver is such a diehard Las Vegas Raiders fan she got married at Allegiant Stadium – something she revealed this week on social media with a series of photos from the wedding.

“Pinch me!! Did we just get married on the 50 yard line at the @raiders @allegiantstadium !!?” she wrote. “Omg and holy 🤯🤯🤯 @charleswoodson i can’t thank you enough for making it Offical [sic] for us. You are the biggest legend there is. RAIDERSSSSS!!!!!!

How freaking cool is that? Getting married in Vegas is one thing – a lot of people have done that – but inside the home of the Raiders? Incredible.