Wheelies, Wrecks And World Record-Breaking Jumps: Here Are The Coolest Things We Saw At The 2019 Monster Jam World Finals In Orlando 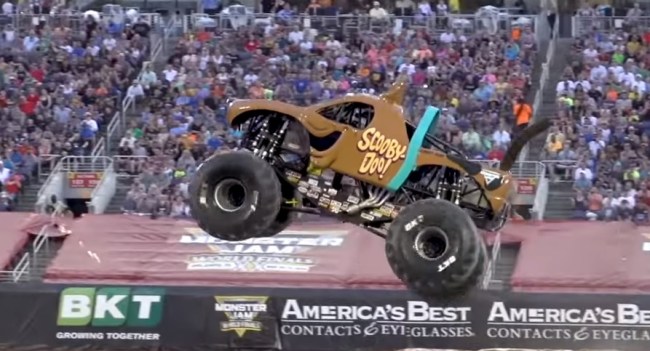 Cars were never intended to be used to pull off front flips, back flips, and wheelies but that hasn’t stopped the good folks over at Monster Jam from doing things with 12,000-pound trucks that the rest of the world never attempt or dream of.

This weekend we made our way over to Camping World Stadium in Orlando to witness the Monster Jam Finals for ourselves and documented some of the coolest things that went down during the two day event. (Make sure to check out Instagram story recap of the event here)

This year’s Monster Jam finals saw the debut of the two wheels skills challenge and things got off to an amazing start when Grave Digger’s Brandon Vinson held a wheelie for nearly 40 seconds.

Vinson’s trick was eventually surpassed by Maxx D’s Tom Meents who was crowned champion of the event after he busted out the sickest wheelie of the show when he walked up a fucking ramp in reverse on two wheels.

I can’t even pop a wheelie on my bicycle and this man is doing this #monsterjam pic.twitter.com/ujRYvKBfrj

Every year Monster Jam produces some of the most gnarly wrecks known to man and during this year’s finals our friends over at CNET’s Roadshow were able to capture a monster truck getting completely obliterated in slow motion.’

Despite less than ideal track conditions due to weather Maxx-D driver Colton Eichelberger was able to set a new world record by jumping seven Monster Jam trucks during the encore of the Monster Jam event at Orlando on Saturday.

Monster Jam prides itself as an inclusionary sport and has made a concerted effort throughout the years to recruit and encourage women to compete in their organization and the end result saw two badass women dominating Saturday night’s action.

First, Cynthia Gualtier became the inaugural high jump champion when she reached an apex of 45.472 feet of an insane jump.

Later on in the night, Linsey Read, a mother of three girls, won the prestigious Monster Jam freestyle event by outlasting 19 of the top male and four of her fellow female athletes to become the first mom ever to win a Monster Jam World Finals championship in the event’s 20-year history and she did it all while driving an awesome Scooby-Doo truck.

For fans wanting see the Monster Jam finals action for themselves NBCSN will provide coverage of the event later this month. A two-hour presentation of Freestyle will be televised on May 25 at 8 p.m. (EDT)