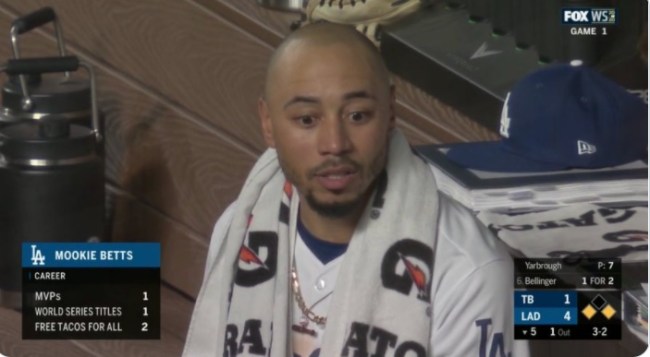 Mookie Betts made some important MLB history during game 1 of the 2020 World Series.

For this year’s World Series, Taco Bell brought back their popular “Steal a Base, Steal a Taco” promotion which allows fans to win a free taco when a player steals a base during the series.

Steal a Base, Steal a Taco is back. If a player steals a base this World Series, America gets a free Doritos Locos Tacos.

In the fifth inning of Game 1 on Tuesday night, LA Dodgers outfielder Mookie Betts stole second base against the Tampa Bay Rays to trigger the taco freebie.

MOOKIE BETTS IS OUR HERO!!

With that stolen base, everyone in America wins a free taco! 🌮🌮 pic.twitter.com/jYfUy1YMPo

Betts, who also stole a base during the 2018 World Series, became the first player to win free tacos for America twice.

For the 2nd time in #WorldSeries history, Mookie Betts gets us free tacos. pic.twitter.com/S2s7KekLo8

nothing but respect for MY president https://t.co/nsh3LEuzlr

has Babe Ruth given free tacos for all? no, that sums it up. Mookie is the GOAT. https://t.co/h1zoANJ8ce

Induct this man into the HOF tomorrow https://t.co/osbz0Ibiqp