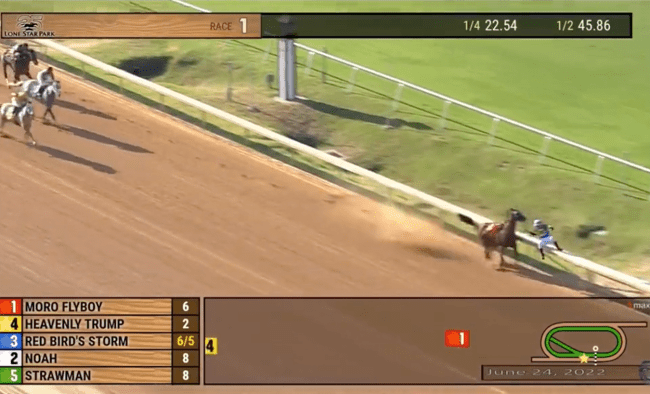 Friday night did not go well for Moro Flyboy’s jockey Simon Camacho-Benitez. He got thrown off of the horse after taking a commanding lead.

During Friday’s race at Lone Star Park in Grand Prairie, Texas, Moro Flyboy took a huge lead down the final stretch. The four-year-old gelding was making his second-career start in the maiden claiming sprint for three-year-olds and up bred in the state.

With a solid seven lengths between him and the second-place competitor, Camacho-Benitez went with a right-hand whip. Moro Flyboy did not appreciate that decision.

In response, whether direct or not, the horse veered in sharply, bounced off of the railing and proceeded to toss his jockey head-over-heels. Camacho-Benitez went flying off of Moro Flyboy’s back and directly into the railing.

Moro Flyboy ran through the wire and finished out with the rest of the field. However, because his jockey was not on his back, they were disqualified.

Fortunately, Camacho-Benitez walked away from the incident and Moro Flyboy was unharmed. It could have been a lot worse, but ended as an all-time bad beat.

Moro Flyboy broke from the rail in the race and led from wire-to-wire— almost.

Camacho-Benitez is taking some time off. He will return over the Fourth of July weekend. Probably for the best.